Ireland beat reigning champions New Zealand in the group stage of the 2014 Women's World Cup in France, only their second loss ever at a World Cup finals. Video: Reuters 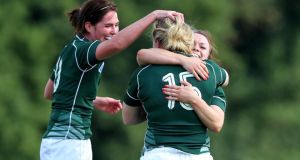 Come here, ever hear the one about the Irish men trying and failing to beat New Zealand in test rugby for over a century before Fiona Coghlan’s women roll into a Parisian suburb and do it on their first go?

You couldn’t make up a yarn like that. Well, it just happened before our very eyes at French rugby headquarters this evening.

The 2013 Grand Slam champions are now on course for a place in the World Cup semi-finals. Victory over Kazakhstan on Saturday will guarantee that.

It was their unrelenting defence that won it for them. That and the brilliance of Niamh Briggs - who kicked the lights out and created a wonderful counter-attacking try for Laois lady Alison Miller

Earlier Heather O’Brien had battered through the black line after 20 phases of pressure. Briggs’ conversion brought the deficit back to a single point, 7-8, at half-time.

New Zealand presumed they would go through the gears and wear them down, we all did, it’s what they always do. But not this time.

They may not respect our professional team but you can be sure they now know names like Briggs and ferocious Jenny Murphy.

But every player performed. Every heroic one of them.

A huge fault at this World Cup needs highlighting here. It was already written about recently by scrumqueens.com’s Ali Donnelly that failure by the IRB to get the best officials on the field - be they men or women - will only damage the tournament’s reputation.

No doubt touch judges Sara Cox and Marie Lematte were trying their best here but they were so obviously out of their depth and made Leah Berard’s refereeing experience a nightmare.

But it didn’t. Just one of those perfect, never to be forgotten days for Irish sport.