Ireland looked weeks, if not months, ahead of Wales in almost every facet 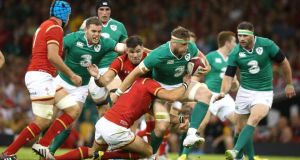 Jamie Heaslip of Ireland charges upfield during the International match between Wales and Ireland at the Millennium Stadium. Photograph: David Rogers/Getty Images

So Pool D runners-up will be playing New Zealand on 17th October. Ahhh. But Pool D winners will have the reward of Argentina a day later. Neither Ireland nor France want New Zealand, but it’s Los Pumas who will capture much attention. With so many positives for Joe Schmidt’s men in Cardiff, an extraordinary Pumas win in South Africa is eye-catching even 10 weeks out from a possible rematch.

As the Welsh performance unravelled under the afterburners of the Irish last Saturday I couldn’t help wonder which is better as a season opener: to attempt an offloading, expansive game full to the brim of sloppy, horrible rugby or to enforce a much more controlled unit and individual performance on the opposition. In truth Ireland looked weeks, if not months, ahead of Wales in almost every facet. Yes the home team had new combinations and youthful exuberance but looked at times all over the place. Watch Alex Cuthbert’s defence for Simon Zebo’s try on 48min. His eyes were totally focused on the breakdown, oblivious to Zebo. Have the Welsh been overtrained with an eye on bigger fish? Even the most limited of defenders could read the danger; Tommy O’Donnell did and fed Zebo for his try. I figure Wales were low on full test match energy from a punishing few weeks that’ll be managed to their benefit come RWC kick-off.

There were some awful individual performances from Wales but it was the system errors around their scrum that concerns. The loss of Adam Jones some time back continues to be costly. But what a revelation to see Mike Ross leading Ireland out on his 50th cap to combine with his pack in neutralising the Welsh.

A season opener is fraught with dangers. The danger of the individual trying too hard and messing up patterns. This did not happen as the Irish lineout maul and especially set-piece excelled at 100 per cent and oft-maligned substitute Michael Bent earned a valuable scrum penalty.

With slightly less possession than the Welsh, Ireland were borderline ruthless in their pursuit of field position and scored five tries to three. There’s also the danger of fatigue. This too did not happen as the Irish looked sharp throughout, and once again the bench slipped on with ease and impact to enhance the solid work done.

So to the observations. Andrew Trimble and Simon Zebo will forever provide this observer with much interest. Trimble smashed his opposite man Eli Walker “man and ball” in a brilliant offensive/ defensive read off James Hook’s flat pass. Keith Earls pounced and exploded all the way; score 0-22. Trimble had his chance to score too. Making it just short of the Welsh corner, it took a brilliant hit from Welsh captain Scott Williams to barrel him into touch. I wonder had Zebo received the same ball would he have scored? What a dilemma for Schmidt. Both players created tries for team-mates – Trimble through a monster tackle, Zebo through the sublimest of flat skip passes.

Heaslip also looked lively, even physically bigger in the new Irish jersey. The Welsh insisting on sloppy play fed directly into his hands; being comfortably employed as a pivot in midfield gave him plenty of access to the ball. Iain Henderson continues to evolve; his carry into traffic on the Welsh line before bouncing, getting his hands free and finding Zebo outside him was class. But at scrumhalf Eoin Reddan looked the man. In charge of his brief and the troops around him, he knew instinctively when to head down the blindside to plunder Welsh territory.

As we head to the Aviva on Saturday I’m conscious of a breakdown warning. Although rare, when Wales maintained error-free possession the Irish struggled to slow the flow. Yes, a variety of quality clear-outs with some turnovers occurred, but the Welsh “rare” quality ball was rarely impacted. Richardt Strauss and his replacement Rory Best have the consistent body technique, so too Chris Henry, and this area will need a team improvement for RWC 15. liamtoland@yahoo.com

1 My favourite sporting moment: Roscommon minors restore pride to a county
2 Spectator sues Tiger Woods and his caddie over incident in 2018
3 Pro14 nations could miss out on €15m in TV revenue if league is not completed
4 America at Large: Hurling fan Dowling leading the fight against Covid-19
5 Harry McNulty: Seeing the world, from Sevens to dog-sledding
Real news has value SUBSCRIBE