Ireland begin defence of title with statement of intent 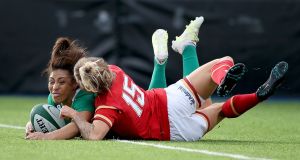 All told, a serious statement of intent from the defending champions.

And a diamond discovered in the process.

It was 2011 when Sene Naoupu moved to Galway, down by the sea in Oranmore, along with her husband George. Sportsground regulars would be familiar with this New Zealand born number eight, a big Samoan lump and decent servant for Connacht over the years.

George’s wife, in one all-encompassing 40 minute display, has become of far greater value to Irish rugby.

Even before Naoupu cut through the Wales midfield and sprinted around fullback Adi Taviner, for a sumptuous individual try, she had made her presence felt in defence with three shuddering tackles.

Niamh Briggs kept adding any extras for a 10-3 cushion after 23 minutes.

Victory looked certain when world player of the year nominee Sophie Spence burst over six minutes before half-time, and Ireland were off to an encouraging defence of their Six Nations title.

This was a must-win game for Tom Tierney’s squad ahead of trips to Perpignan and Twickenham later this month.

The concern beforehand was that a largely inexperienced backline would be exposed by supposedly more skilful Welsh three-quarters. Naoupu immediately questioned that theory while Larissa Muldoon and Briggs brought some calmness behind the breakdown (which Ireland also dominated).

New outhalf Nikki Caughey proved to be worth her place over Nora Stapleton with a few eye-catching half breaks. But this victory was firmly built on Heather O’Brien’s pack where Spence was the first among equals. Claire Molloy a close second. They knew when to hold the ball, work through phases and drain the life out of their visitors.

Briggs did the rest. She made it 18-3, thanks to a second penalty early in the second half, and 21-3 off her fourth successful strike, which allowed Tierney to empty the bench.

Naoupu didn’t disappear either. An North Otago rugby player since her teens, this was so obvious approaching the hour mark when she ran cross-field, drawing two red jerseys yet all the while signalling for Aine Donnelly to run an inside line for the hole she was creating.

When her teammates get used to what she’s doing more tries will come and against better defences than this.

“12 is her best position, as you could see out there,” said Tierney.

South east France next, with the championship back on the line.

Ireland have never beaten England or the French away. They have a pack capable of addressing at least one of those issues before a return to Donnybrook in March.

1 Dan Tuohy explains ‘rotten to the core’ comments
2 Six Nations: No place to hide for Ireland’s misfiring captain
3 Questions raised over Ireland v Italy fixture due to coronavirus
4 McIlroy takes his foot off the pedal and will skip the Honda Classic
5 England 24 Ireland 12: How the Irish players rated at Twickenham
Real news has value SUBSCRIBE

McIlroy takes his foot off the pedal and will skip the Honda Classic 20:01
GPA asks delegates to vote against hurling black card at congress 18:33
Dan Tuohy explains ‘rotten to the core’ comments 18:08
Serie A matches to be played behind closed doors due to coronavirus 17:54
Sam Bennett sprints to second in stage two of the UAE Tour 15:55
Here is your handy guide to sport on television this week