Impressive Darren Cave would love another chance to shine

Ulsterman lays down marker with strong try-scoring performance against Wales 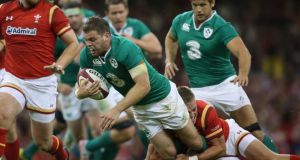 Darren Cave’s prospects of making Ireland’s 31-man squad were enhanced last season by him reinventing himself as an inside centre. Given he can also play outside centre, such versatility cannot do his cause any harm, but then again he’s in a very competitive area.

As Joe Schmidt has also acknowledged that evidence of good combinations working together will be a factor in his thinking, the effectiveness of Cave’s midfield partnership with Keith Earls is another positive in favour of both of them.

Born in the same year, 1987, they were under-20 contemporaries on the Irish scene, and Cave reminded us after Saturday’s handsome win that they played together in midfield for the Irish As in the 2007 Churchill Cup. Each scored a try last Saturday and came close to more, as they were frequently employed as the starting point of Ireland’s attack by running at the Welsh midfield.

“Keith and I are both the same age (he’s 28 and Earls 27), so we would have played U20s before and we actually played in midfield during the Churchill Cup in 2007 – he was 12, I was 13,” said Cave. “His form has been absolutely incredible since the end of last season. We were keeping an eye on him at Ulster because we knew we were going to have to play them. He still managed to score in that game. Centre or wing, wherever he plays, his feet are electric. It’s nice to play with players of that quality.

“I’ve always had a relationship going back to that U20s team . . . That’s eight years ago so I’ve known him a long time. So I’d say we did look good together, but then it’s easy to look good together when you have his sort of quality outside you.”

“He got man of the match and I think he had a great game. And it’s upwards an onwards now and you don’t know what selections are going to be.

“It’s about finding the balance between playing your own game and trying to help the team. It’s something we did quite well against Wales. If you look across the board, some of the boys up front gave us a really good platform. The tries were shared out between five different scorers, which is always a good sign. A lot of players played well. And if you play well, that makes it easier for the guy beside you to play well.

“I don’t think there were that many standout players. I just thought it wasn’t a perfect performance, but it was a decent starting point. I’d love to get another chance. It’s a bit early for me to be thinking about that; I’ll take it when it comes.”

Cave looked as surprised as anyone by the relative softness of his second Test try. He was also quick to acknowledge the sense of debt he owed to the Irish scrum, which twisted the Welsh backrow and Justin Tipuric infield when Mike Phillips showed him the inside shoulder and virtually a free run to the line.

“I thought our pack was very good. There were a couple of times when Wales looked as if they had a nice attacking platform from scrum and it was really disrupted. That’s where your defence starts, from the set- piece and then two passes later Andrew Trimble is smacking someone in contact and that produces a try. That all starts from the scrum.

“For my try, I just stepped off my left and their backrow was tucked away because of the job the boys had done up front. So it shows it’s the ultimate team game.”

Also making all his tackles, overall therefore, he could be content with his lot. “I was happy, I didn’t know what to expect. There was a lot of talk about Wales and how tough their pre-season has been, but I guess at this time of the year everyone is working hard, you know?

He admitted to being both nervous and excited in equal measure in the build-up to the game. “It was only a short pre- season, there was only five weeks’ training. Normally, in a non-World Cup year you get around eight weeks to prepare you for a season, this time it’s five weeks. So I was a little nervous because of that. I haven’t played in many arenas like that before. I know it wasn’t a Six Nations game, but there was a massive crowd and a great atmosphere. It’s nice to be able to be part of a team that can deliver a result in that atmosphere.”