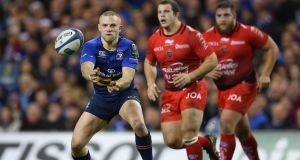 Ian Madigan new deal with Bordeaux-Bègles is believed to be at least €500,000 a season. Photograph: Billy Stickland/Inpho

Whether the 26-year-old gets selected by Ireland next season becomes a litmus test of sorts. The logical answer is, yes, simply because he will probably be playing regularly in his best position, which is unquestionably outhalf.

However, the IRFU performance director David Nucifora stated last week that Madigan’s chances of a national call-up will now decrease.

“If Ian decided to go and he played 10 every week, we wouldn’t ignore him, we don’t ignore any of the players that might be overseas. We watch them all very carefully,” Nucifora said, before adding: “Does it mean that he is at disadvantage behind the boys playing in Ireland? Yes, it does.”

The IRFU wanted Madigan to move to Munster. There were also lucrative offers from English Premiership clubs Bristol and Harlequins.

The problem for the union is that if he, or JJ Hanrahan who appears to have settled at Northampton, are picked on form for Ireland, there is no reason why more players in a similar situation won’t take the opportunity to earn as much as they possibly can abroad in the ever-shortening career that is professional rugby.

Until his current contract, Madigan was reportedly on an €80,000 development deal and before that a minuscule €5,000 academy wage. His new deal with UBB is believed to be at least €500,000 a season.

There is also significant tax reductions for those playing professional sport in France.

Whereas Johnny Sexton’s departure to Paris two seasons ago seemed a severely damaging blow to Leinster’s status as a European superpower, Madigan’s decision to embrace life in the south of France is doused in common sense.

A versatile back with an 87 per cent conversion rate, he rarely gets the opportunity to wear the number 10 jersey for Leinster or Ireland.

That’s because of Sexton and previous Leinster coach Matt O’Connor rigidly sticking with Jimmy Gopperth over the player who was educated at Blackrock College. Used mostly at inside centre and occasionally fullback by O’Connor, when called upon to replace the injured Sexton during last October’s World Cup quarter-final, Madigan lacked the requisite exposure to perform in the most demanding play-making position on a rugby field.

“He played only a handful of games for his province as a starting number 10,” Nucifora added. “When starting at 10 in a World Cup quarter-final, is that the perfect preparation?”

Despite Paddy Jackson, the other outhalf in Joe Schmidt’s Ireland squad, starting these past three seasons for Ulster, Madigan’s kicking statistics were presumably too strong to ignore.

He has also shown that he has a resilient temperament. An obvious sign of this has been his form since throwing the intercept pass for Bryan Habana to settle the Champions Cup semi-final last season. That form was probably best seen on Sunday at Thomond Park when Sexton was again injured.

Clearly Madigan is entering his prime. But any hope of Leinster keeping hold of him seemed to pass when he was confined to three minutes off the bench in Toulon this month despite Sexton having another off day.

“It was inevitable Ian Madigan would leave,” tweeted Brian O’Driscoll yesterday. “Deserves to start at 10 somewhere so good luck to him.”

Leinster head coach Leo Cullen appeared to echo these sentiments. “We fully understand his motivations for deciding to join Bordeaux,” said Cullen. “Ian has come through the Leinster academy and age-grade system and at 26 still has a huge future in the game and we may see him return to Leinster at some point.”

A future return cannot be solidly predicted but his departure will provide real opportunities for Cathal Marsh and Ross Byrne.

What’s clear is that Madigan aspires to become a world-class outhalf and has chosen a club with a similar hunger for success and the means to achieve it. UBB, founded in 2006 when the two areas amalgamated, have shown genuine intent to challenge for the Bouclier de Brennus (the Top 14), and eventually in Europe, since Hong Kong investment company GaveKal, which was co-founded by French man Charles Gave, bought a 10 percent stake in the club earlier this year.

Simon Hickey, the talented 21-year-old Auckland outhalf, is currently keeping Madigan’s jersey warm on an eight-month contract but has stated his intention to return to New Zealand next summer. Unless Hickey remains, 30-year-old French outhalf Lionel Beauxis looks like Madigan’s main competition to play regularly in a team that currently lies fifth in the Top 14.

Ben Te’o’s departure to Worcester next summer was also confirmed this week so an update on Robbie Henshaw’s move from Galway to Dublin seems like the next logical news to be drip fed into the public domain.