Ian Keatley to pull the strings for Ireland in Rome

Gerry Thornley and Gavin Cummiskey preview Ireland's opening Six Nations game in Italy. Ireland will be looking to kick off their title defense with a win. Video: Daniel O'Connor

Joe Schmidt says that they had one of their longest selection meetings before announcing the Irish team that is going to travel over to Italy in their opening Six Nations game. 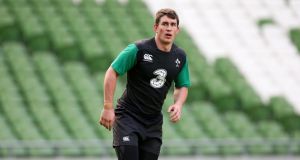 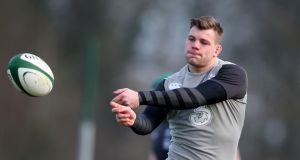 Jordi Murphy has also done enough in training to get the nod at number eight. Photograph: Dan Sheridan/Inpho 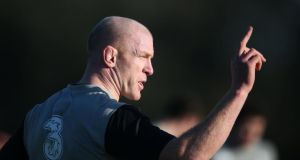 Ireland captain Paul O’Connell gets his point across at training this morning. Photograph: Dan Sheridan/Inpho

Ireland go to Rome without their two best players, Johnny Sexton and Jamie Heaslip, yet confidence is the overriding feeling ahead of the Six Nations opener.

As usual, the Ireland coach rewards the in-form players with Jordi Murphy and Ian Keatley earning their first starts in this ancient tournament at the Stadio Olimpico on Saturday.

Heaslip (shoulder) and Sexton (concussion) will almost certainly return to face France’s in Dublin next weekend.

“Jamie trained fully today,” said Schmidt. “If that had of been Tuesday that decision may have been different. We do believe Jamie is one hundred percent fit . . . he will focus fully on the French game.”

Sexton sees neurosurgeon Dr Jean-François Cherman today, when it’s expected he will get the all-clear to resume contact training having been stood down for 12 weeks.

“We are confident, Johnny is very, very confident that he will be fully fit for France.”

In the meantime Keatley’s impressive form, despite Munster troubles in Europe, sees him glide past Ian Madigan in the outhalf pecking order.

“Part of it is his combination with Conor Murray,” Schmidt explained. “They play well together week-to-week. Not that Ian (Madigan) couldn’t play well with Conor but Ian Keatley has had that rhythm of playing at ten on a regular basis. Madigan obviously hasn’t, he’s played a lot at 12.

“It was a reasonably tight decision but a vote of confidence in Ian Keatley.”

Madigan has not been helped by Leinster coach Matt O’Connor preferring New Zealander Jimmy Gopperth with Madigan’s place-kicking utilised from inside centre to the detriment of Gordon D’Arcy’s test career.

Murphy has played openside wing forward since returning from injury in December but his performances, allied by a run at number eight last season, was enough to satisfy Schmidt and forwards coach Simon Easterby.

“What we are missing is experience that Jordi cannot bring. We are also missing accuracy, Jamie brings incredible accuracy. He is quite often overlooked for the amount of work he gets through in the same.

“At the same time, Peter O’Mahony has that experience. He’s a leader in his provincial team and in our group.

“What Jordi has to bring is security at the base of the scrum and clarity in defence.”

Jack Conan may be the form number eight in Ireland but test rugby appears to have come a little too soon. In contrast, Sean O’Brien clearly did enough in his 50 minute cameo against the England Saxons last Friday.

O’Brien’s last test match was a stunning performance against the All Blacks in November 2013.

“We didn’t see Seanie starting this week but we felt he did well in the Wolfhounds game. There is always a degree of risk in bringing a player like that off the bench in case he runs out of steam.”

Felix Jones, outstanding for Munster all season, keeps hold of number 23 despite the return of Keith Earls and Luke Fitzgerald.

Schmidt has also reverted to his preferred midfield partnership with Robbie Henshaw at inside centre and Jared Payne wearing 13. Both are also making their Six Nations debuts.

Despite being dropped by Leinster, Mike Ross is retained at tighthead prop ahead of Marty Moore.

“We think Mike can continue to do a job.”