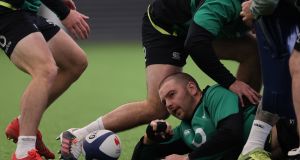 Ireland will likely welcome an infusion of a few fresh faces for this Friday’s Autumn Nations Cup opener against Wales in the Aviva Stadium (7pm) and none will be straining at the leash more than Iain Henderson in what will be the 28-year-old’s 56th Test.

His three-week ban following the first red card of his career for barely shunting back Dan Evans a metre or two when Ulster beat the Ospreys on October 10th, thereby ruling him out of Ireland’s final Six Nations games at home to Italy and away to France, hardly seemed commensurate with the crime.

Henderson’s Test career has had a mite too many interruptions for his own liking but the net effect is that this Friday will mark his first Test since the Six Nations win over Wales last February, fully nine months ago.

“I think if anything it was probably clumsy,” admitted Henderson of the attempted counter-ruck in the 75th minute, when catching Evans initially on the chin. “We joked about it afterwards, had it been maybe 50 minutes earlier in the game I might have got a better body shape. A bit of fatigue kicked in there. It was stupid on my behalf, especially trying to close out a game like that, to be giving anything stupid away. So that’s probably a frustration for me.

“It’s not ideal. Some people were complaining about the ban but it is what it is. I put my hand up and say it shouldn’t have happened and again it’s discipline, something I know that I’ve had to work on in my game a few times. So I’ll be looking to stamp that out of my game.”

Henderson’s haul of 55 caps is one of innumerable ways of putting into context the longevity and durability of the 35-year-old Wales lock and captain Alun Wyn Jones, who is in line to play his 150th Test this Friday after surpassing Richie McCaw’s world record last Saturday week in his country’s defeat by Scotland at Parc Y Scarlets.

“I roomed with him on the Lions tour and he’s a great lad,” said Henderson. “He was insightful in almost everything you would chat to him about. I really don’t like playing against him; it’s probably one of his biggest talents and I think when players don’t like playing against other players it’s almost a compliment to the kind of player they are.

“He obviously adds a fair bit of oomph to their pack, he is an absolute pest when it comes to breakdown and maul time. You know the scrum generally looks a bit stronger when he’s in behind there. In terms of the charisma that he brings to their team he’s obviously captained them a lot and has a lot of leadership qualities which you see coming out, not only for Wales and Ospreys, but you saw it coming out for the British and Irish Lions.

“So those are things that he brings and trying to negate that is difficult because he is a resilient character who will continue to bring that no matter how the game is going for them. I’d enjoy playing against him for that sort of reason but the other challenge is enjoying playing against him and it’s good to catch up with him after games too.”

Asked if the Wales captain and James Ryan were in any way similar as players, Henderson hummed and hawed at length.

“Alun Wyn Jones is extremely destructive in defence, James is obviously destructive in a lot of things he does about the pitch. They are similar in aspects like that, I suppose, in terms of upsetting the opposition, but the way they go about it, I wouldn’t say they are hugely similar there.

“Emmmm . . . I suppose they do have their similarities but I don’t think they’re altogether similar.”

Henderson partnered Ryan in the secondrow on the latter’s full Test debut in the home win over Argentina in November 2017, and again when Ryan began to become a fixture at the start of the Grand Slam campaign with that famous win in Paris, when the Ulsterman set that final 41-phase drive in motion by reclaiming Johnny Sexton’s 22m restart.

They have shown plenty of signs that they can build a powerful and dynamic combination, yet, for one of reason or another, mostly injuries to Henderson, they have never really had an extended run in the team together. To date they have started 14 (11 wins and three defeats) of Ireland’s 32 games since that Argentina game in November 2017.

“I would say ‘Cheese’ and I have a great relationship together. He’s a good friend – we chat, not only in camp but outside of camps, too. We get on the same page together, we chat a lot about not just lineout but scrum and phase play outside of that too, so I’d say we have a very good working relationship together, something that I hope to see get better and better and get closer as time goes on.

“And I think the more Tests that we get together, the better we’ll start working together. So I’m excited about what we’re hopefully going to achieve together in whatever career I’ve got left,” he said with a smile, “and hopefully we can make each other better for it”.

The best, you’d think, is still to come.