Owen Doyle: Ireland should have been awarded penalty try for Bouthier bat 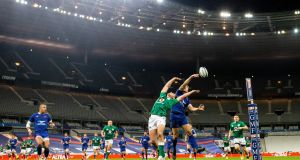 France’s Anthony Bouthier knocks on the ball as Ireland’s Hugo Keenan looks to catch it during the Six Nations match at the Stade de France. Photograph: James Crombie/Inpho

Paris – the match is in its 18th minute, Ireland are pounding the French line in the familiar pick and drive version of the Eton Wall Game. Caelan Doris side-enters the breakdown to destabilise the defensive platform, and moments later Cian Healy touches down. It’s seven points, whereas a penalty to France was due.

It should have been picked up, but, in fairness to referee Wayne Barnes, who had a good match, it was one of the few he missed. And it is an offence which – at very, very long last – is on the wane. I don’t know where that truly awful pun came from, but I’ll leave it there.

Two very important things are achieved by a referee’s vigilance in this area. Firstly, it is a safer sport when the human Exocet missiles are taken out of play. Secondly, the speed of ball allows fast release of the backs who then face less organised defences, and the game is hugely improved.

The other issue I have with the match officials was the failure to award a penalty try to Ireland when fullback Anthony Bouthier batted the ball out of play as Hugo Keenan (who also looked to have been nudged?) appeared in a position to gather and score.

In their communication, the officials initially used the word ‘probable’ and they were right to do so – the law requires the probability that, but for the offence, a try would have been scored. It does not have to be a definitely nailed on try, but the more they reviewed the incident it seemed the officials wanted more than probability.

Indeed, when Barnes explained the decision to Ireland captain Johnny Sexton he said “we’re not sure it’s a definite try.” Wrong to base the decision on that.

The red herring, introduced by TMO Luke Pearce, of Gael Fickou covering was unnecessary and confusing. Fickou was not realistic cover – if Keenan had been allowed to catch the ball which he probably would have then he would have scored.

Next, and absolutely correctly, Barnes did not need any TMO assistance when he did award a penalty try to France. When Doris took down Francois Cros without the ball, the referee used his own judgment, good stuff.

The French showed a united strength of purpose and a strong common bond. In their search for fast ball at every availability, Fabien Galthie and scrum coach William Servat have transformed their set-piece into a solid legal platform – again, rugby will be much improved if all teams saw the real purpose and benefits of scrummaging in this way.

On the eve of the match France released a video of the team being presented with their match jerseys – each player spoke with feeling of his start in rugby, of his amateur days and the privilege of now being with such a group of team spirited friends, companions. It was quietly emotional in all the right ways and is reflective of a happy and determined camp. The iconic figures of Galthie and manager Raphael Ibanez are determined to change the team culture and they have got off to a great start.

Looking at Sexton’s demeanour when he was replaced, I wondered is it the same for Ireland?

Ireland’s Andrew Brace was presented with a completely different kettle of fish to referee in Scotland v Wales – on many occasions this fixture has been a terrific match, but on Saturday it was a shocker. Even when the ball was immediately available, neither team seemed really interested in putting pace on the game and these are hard days at the office for any referee.

In sharp contrast to France, Scotland wanted their own private scrum battle, and played for penalties. Maybe a harder warning and the use of a card might have helped?

In general, most referees are too soft at the early scrums and choose repetitive resets and explanations. They have done all of this prior to the match in discussion with the frontrows, and so they need to deliver effectively without delay, instead of repeating what has already been said.

Even Wales, while being concerned at inconsistency at the breakdown, cannot blame Brace for their defeat. They look a forlorn shadow of the teams which Warren Gatland regularly produced, despite the regions poor play in the Pro14. In this match they produced something similar to those performances.

In Rome, as expected, England did the necessary despite being drawn into over-aggressive confrontation with the Italian forwards. Referee Pascal Gauzere needed to change his tone, firm words were required to sort things out, but he – on the day – did not convince despite his huge level of experience.

To finish up, I want to refer to the appointment of Joe Schmidt by World Rugby as director of performance, with the referees coming under his watch. I believe that this (about which more anon) is to be a hugely important and significant role. The referee cohort will no longer be able to operate within their own bubble, and ignore law when they think it suits them to do so, and not all officials will welcome this new system. But it is necessary.

Coaches bemoan the lack of space available, and here is one area which could be quickly rectified. When a lineout maul forms the referees signal to both sets of backs to come up to the “offside line” the split second that the maul makes any movement.

This signal is useless to the team in possession who wish to release their backs, but offers a huge advantage to the defence. What does the law say? It very simply requires that all non-lineout players stay 10 metres back until all of the maul has moved off the original line of touch. That law refers to the feet of all of the players.

Heaven alone knows why the referees have decided not to implement it, and thus protect that most valuable of commodities – space. Over to Joe.