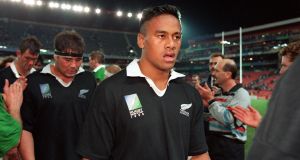 A foreboding thought: The All Blacks are playing for Jonah Lomu.

Lomu passed away one year ago aged only 40. The All Black legend and giant winger who single-handedly carried rugby union as a spectacle to another, unimaginable level with stunningly powerful performances, succumbed to a heart attack caused by a kidney disease he had battled his entire adult life.

The Lomu story will never be forgotten. A backrow until switching to left wing after schooling at Wesley College in Auckland, this friendly, humble Tongan became the youngest ever All Black in 1994 at the age of 19 years and 45 days when capped against France.

Ten months later Lomu entered the sporting stratosphere with the destruction of Ireland, Wales, Scotland and most memorable of all his four try demolition of England in the World Cup semi-final.

His test match career was cut short by the illness in 2002, yet he still finished with 63 caps and 37 tries.

“He is the reason why I played footie,” said current All Black captain Kieran Read ahead of facing Ireland at the Aviva stadium. “I grew up in the area he was from and where he played his footie.”

Both future All Blacks hailed from, and played for, the Counties Manukau region just south of Auckland.

“I went to watch him every weekend. He was a massive inspiration for me and I know a lot of the other guys.

“He was more a legend for what he did on the pitch as he did off it, just his smile. He was a top man.

“He is one of our legends in this All Black environment and family.

Extra motivation or whatever you can call it for the group. We will be playing for him and his family, who we really feel for at this time of year.”

New Zealand as a country are having a tough time this past week following another earthquake north of Christchurch.

“Another thing back home, the earthquake, is on a lot of the guys minds as well,” Read added. “The best way we can do that is go out there and perform on the pitch.”