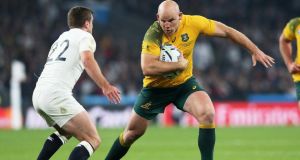 Australian captain and hooker Stephen Moore and the rest of the Australian frontrowers did their talking on the pitch against England at Twickenham. Photograph: David Rogers/Getty Images

We have all got to accept England are simply not good enough. There is no doubt they gave their best against Australia and turned up to play but across the park their athleticism, skill level and execution paled in comparison with the hugely impressive Wallabies, who played at speed, had sublime skills and executed superbly most of the time.

England were, at best, a six out of 10 and Australia a nine. Both teams were penetrating when attacking from set pieces but when it came to building moves from the breakdown, there was a considerable gap. England took a lot longer to recycle mainly because Australia hit harder in the tackle and went forward on contact and put a lot more heat on the tackled ball.

They had two genuine No7s in David Pocock and Michael Hooper, physical fetchers with a superb low body position at the breakdown. They were helped by England’s predictability in possession, hitting the short-ball runner or, more frequently, missing him behind and going wide, an easy read for the Wallabies.

Australia played flatter, on the advantage line, and went forward allowing them to recycle the ball more quickly with no real pressure from England. They had a lot more variation to their play from the breakdown, skilful under pressure, and that was a major reason why they won.

The second factor was the scrum in what was a massive turnaround by the Wallabies. England talked too much during the week: Ben Morgan said how they were going to again dismantle the Australia scrum and use it as a catalyst to win the game but they were humbled at the set piece where Australia’s three frontrowers, led by the impressive captain Stephen Moore, and their replacements, would have talked about this battle over a pint long into the night and will probably still be doing so when they go to the grave.

They let their actions do the talking, a reversal of Morgan’s garbage to the media, and turned what had long been an Achilles heel against England into a strength. Why did the England management allow their players to talk such drivel to the media, stoking Australia’s fire?

I couldn’t believe Danny Cipriani saying not one Wallaby would make the England team and wondered if he had been misquoted. He may not have been in the squad but Stuart Lancaster would have been furious. One of the golden rules in sport at this level is you never give the opposition a team talk. It’s also one of the reasons teams love to beat England – they talk a good game!

Australia preferred action to words and the rebuilding of their scrum by the former Argentina hooker Mario Ledesma has turned them into World Cup contenders. You could see the improvement during the Rugby Championship but bigger tests up front are to come. England have not scrummaged well for the past two months and Joe Marler was finally called for boring in.

Another surprise was Bernard Foley at flyhalf whose 28 points included two tries. I thought he could be a problem for Australia, not good enough at this level, but how the player of the game proved me wrong. He played with authority, navigating his side adroitly, kicking astutely and landing all his kicks at goal; above all, he was the most penetrative back on the field.

His first try was a classic, weaving his way through two defenders and beating England’s best player, Mike Brown, and his second was just as good, putting Kurtley Beale through a hole with an inside pass and taking the superb return. He was helped by having Matt Giteau outside him and the pair, who scored Australia’s three tries, showed the value of having dual playmakers.

Other teams will now take note of Australia and the work being done by Michael Cheika and his quality coaching team who have addressed weaknesses. England now have to conduct the post-mortem. As I know from 2007, it is extremely difficult and demanding on everyone, not pretty at all.

The World Cup has never been just about England. If the hosts are feeling sorry for themselves, Japan could become the first side to win three group matches and not make the knockout stage. They have been a pleasure to watch and Samoa may stir themselves against Scotland on Saturday to provide a twist.

With most of the quarter-finalists decided, Australia are ones to watch. South Africa have recovered from losing to Japan but they appear back to their old ways, more brawn than skill, high in their carries (and tackles) all game against Scotland and slow to get the ball away. They are distinctly beatable and the Scots may come to regret not selecting their best team. Samoa have been one of the big disappointments of the tournament and with the pool of death having suffered an early fatality, attention this weekend will be on the group that has shown how the sands in the game may be shifting.