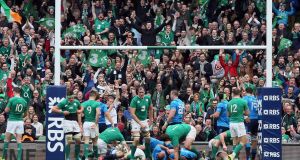 Scotland’s first win in a decade over France at Murrayfield, by 29-18, secured the Six Nations title for England and sets up a potential shoot-out between Ireland and the Scots at the Aviva Stadium next Saturday for third place. Not exactly Super Saturday, but the demarcation lines have been drawn.

Presuming Wales beat Italy in the day’s opening game to secure second place and consign the Azzurri to yet another whitewash, the winners of the Aviva match will go third in the table.

They’ll finish there too unless France overcame back-to-back defeats and a six-day turnaround to deny England a Grand Slam in Saturday night’s Parisian finale.

Ireland move on from an Italian job well done. Schmidt maintained that the players’ confidence hadn’t been dented by a four-game winless run, but intimated it had affected him.

In direct contrast to the opening two rounds, Schmidt now approaches the second of back-to-back home games with a seven-day turnaround against opponents with a six-day turnaround. The flip side of losing to Scotland would see Ireland finish fifth.

“We’re desperately keen not to let things slip away,” said Schmidt. “A championship is five matches. We know the challenge that comes next Saturday.

“I’ve watched a fair bit of Scotland. They are very, very good this season,” said Schmidt, who noted how Willem Nel had solidified their scrum, the lineout pressure that comes from their locks, Richie and Jonny Gray, their plethora of dynamic backrowers, and the form of Greig Laidlaw at scrumhalf and the back three of Tim Visser, Tommy Seymour and Stuart Hogg.

Rob Kearney, Eoin Reddan and Cian Healy are all expected to recover from minor injuries and return to the mix this week.

Simon Zebo’s penetrating lines of running and vision were epitomised by his offload in the eight-pass move that led to Jamie Heaslip’s stunning try on half-time – albeit he defended too narrowly for the David Odiete try – and gives Schmidt his biggest selection poser at fullback.

“There are guys who knew today was an opportunity, who wanted to say: ‘Look, I’m going to work really hard for this jersey.’ We’ll have a look back and see how, what and why to try to put together a really competitive group for next week, and some of those decisions I’ve no doubt will be really tight.

Regarding Heaslip’s first try, Schmidt said: “The licence to play is always there, you just get a little more suffocated when you’re up against sides that are very, very well organised. Wales attack with their defence. They don’t tend to convert massive scores. What they do is they suffocate, they strangle opposition.

“It’s harder when you play them or when you play England to get that freedom. I think the players enjoyed that opportunity because there’s no very often that you get that in a Test match, particularly not a Six Nations test match.”