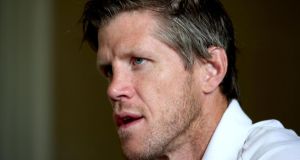 Without wishing to rake up old wounds, Simon Easterby yesterday conceded that with regard to selection for the forthcoming warm-up matches and the World Cup itself, the lessons of the flawed 2007 campaign are particularly pertinent.

Easterby was one of the so-called 15 ‘Untouchables’ ring-fenced from the tour to Argentina that summer and pencilled in as the first-choice XV for the World Cup pool stages from the preceding Six Nations. But while some front-liners remain key, selection cannot be as pre-meditated this time.

“There are certain positions which you would probably say are locked down, but it’s also a case that the World Cup comes around once every four years and you’ve got to be on form,” the Irish forwards coach said at the squad’s base in the Carton House hotel.

“This isn’t about development, it’s about going to a World Cup and performing to the best of our ability. There might be guys who miss out and there might be guys who come and you might be surprised by their selection. It’s about what’s happening over the next four, five weeks and positively into September and October.”

Easterby made his comments in the context of any World Cup “bolters” emerging from Ireland’s August warm-up games, a la Conor Murray four years ago. Given Ireland’s settled nature, scope for any surprises in the 31-man World Cup squad appear limited, all the more so as only three of the four warm-up games come before the cut-off point.

Thus any pointers are likely to come with tomorrow’s selection for Saturday’s game against Wales at the Millennium Stadium if, for example, Noel Reid was included in the starting line-up.

Having rung Warren Gatland last week to discuss their approach to selection for this game, Joe Schmidt is likely to emulate the Welsh coach by naming a mix of experienced and fringe players, if not to the extent of naming four uncapped players (Dragons’ centre Tyler Morgan, Ospreys’ winger Eli Walker, Bath lock Dominic Day and Gloucester flanker Ross Moriarty).

Easterby was non-committal on when they are liable to return to training or action, but with Canada and Romania the opening two pool games, game time this month may not be a prerequisite for inclusion.

“We haven’t discussed that. It is difficult to put a definitive answer on that. We’ll have to assess that nearer the time.”

Connacht tight-head Nathan White remains the only addition to the original 45-man training squad, taking to eight the number of props.

The Canadian game, as with Ireland’s potentially decisive pool finale against France, is on in the Millennium Stadium, thus making Saturday’s game against the Welsh at the scene of Ireland’s only Six Nations defeat last season and in front of a 74,000 capacity crowd all the more relevant.

“It’s ideal,” said Easterby. “We’ve two Tests there in the World Cup, first up against Canada. Absolutely, it’s a great exercise for us looking down the line a little bit, but also in terms of going to the Millennium Stadium and the last time we were there we didn’t have our best day.

“There will be a few players who will have experience of that place and some won’t, there will be plenty to take out of the match, hopefully more positive than negative and it will be something to build on.”