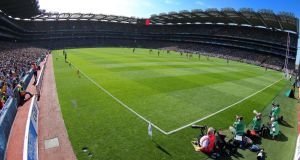 Croke Park: under the deal reached last month, the 82,000-capacity stadium would be used for at least both semi-finals and the final of the 2023 Rugby World Cup if the bid was successful. Photograph: Inpho/Cahill Noonan.

The GAA has struck a funding deal to upgrade as many as six of its stadiums to be included in Ireland’s 2023 Rugby World Cup bid. The outline agreement with the IRFU came following political intervention.

The IRFU, together with the Government and the Northern Ireland Executive, is expected to confirm in Armagh this morning that Ireland will push ahead with a cross-border bid to host the tournament.

Sources confirmed that an agreement between the IRFU and the GAA that funding would be provided to upgrade the stadiums was reached last month. It was brokered by the Minister for Sport Paschal Donohue and junior minister for sport Michael Ring.

Approximately 11 stadiums are required to make a bid. The IRFU can provide four – the Aviva Stadium and the RDS in Dublin, Thomond Park in Limerick, and Ravenhill in Belfast.

The rest will be provided by the GAA.

Under the deal reached last month, the 82,000-capacity Croke Park would be used for at least both semi-finals and the final, with a capacity of at least 60,000 required for those games. The stadium could be used for as many as seven games.

They would however, with the exception of Croke Park, likely require enhanced media and corporate facilities, plus the addition of big screens and possibly more floodlights. Some of the rugby stadiums would also need upgrades.

The IRFU did not respond to a request for comment .

A report by Ernest & Young has suggested next year’s World Cup in England would be worth almost £1 billion to its economy. About 466,000 visitors are expected to attend, France attracted 350,000 visitors for the 2007 World Cup.