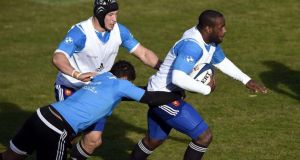 France’s loose head prop Eddy Ben Arous runs with the ball during a training session - he is the sole change to the French team named to play Ireland on Saturday. Photograph: Franck Fife/AFP

France have named an unchanged team barring the enforced replacement of the injured Alexandre Menini with young loosehead Eddy Ben Arous, for the trip to the Aviva Stadium on Saturday.

Head coach Phillipe Saint Andre’s one change to the starting 15 comes after Menini picked up a foot injury during Saturday’s 15-8 home victory. The 24- year-old Racing prop Ben Arous has stepped will step in from the bench for his first international start and his third cap.

He is replaced on the bench by veteran prop Vincent Debaty, who along with secondrow Alexandre Flanquart was called into the training squad mid-week in place of the injured Menini and Jocelino Suta.

Saint-Andre expects Debaty to make a difference in the final 20 minutes.

Ireland sealed the 2014 title with a 22-20 victory in Paris, but Leus Bleus replacement Debaty held a clear scrummaging edge on replacement Marty Moore during a nervy end game.

“Debaty gave his Irish opposite number a really hard time in the final 20 minutes of the game last season so it is logical to have him on the bench,” said Saint-Andre today. “Our bench is packed with power players so we can introduce them late on and they will give the impetus to break tackles and gain ground.”

Moore, who has edged ahead of Mike Ross at Leinster, but is likely to continue to sit behind the 33-year-old at international level for now considering the latter remains Schmidt’s only ever-present Test selection.

Moore has already admitted he was given a scrummaging lesson by Debaty last year but he is determined to avoid a repeat.

“I wasn’t happy with my dealings with them last year, so I’m looking forward to getting a chance to right a few things,” said Moore. “I suppose a year is a long time in pro sport, so as a more experienced player I know what to expect at the setpiece.

“Debaty brings a lot to their frontrow: he’s a very aggressive player, very aggressive in the setpiece. Whatever way it comes, I’m sure I’ll be squatting down against him at some stage.”

Ireland are expected to hand Johnny Sexton an immediate return at outhalf following their 26-3 win in Italy, after the Racing Metro playmaker completed his enforced 12-week concussion lay-off. Schmidt will name his squad on Thursday afternoon, but Saint Andre has already told his players to heap early pressure on Sexton this weekend.

“Sexton is a stalwart of this Ireland side, but he hasn’t played for 12 weeks and we should really test him early on,” said Saint-Andre. “Ireland are full of confidence and showed that when they seized the game by the scruff of the neck against the Italians once they were down to 14 men.

“They have won eight in a row and are the favourites for the title.”

South African Rory Kockott, who was handed his first start for France when he was named at scrumhalf in the team to face Scotland in their Six Nations opener at the Stade de France last Saturday, has held on to his place at the expense of Morgan Parra who impressed when introduced in that encounter.

Kockott will pair up with usual outhalf Camille Lopez, as Scott Spedding remains at fullback despite the return of Brice Dulin.