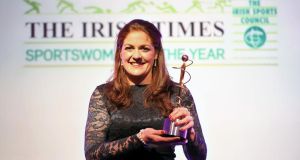 Following on from Katie Taylor, who won last year’s award following her gold medal in the London Olympic Games, Coghlan earned her award after leading the Irish women’s rugby team to their first ever Grand Slam in last season’s Six Nations Championship.

“I’m delighted to win an award like this. You don’t start out in a season and train hard to win these but it makes it a lot better at the end of the year,” said Coghlan at today’s awards ceremony at The Shelbourne Hotel in Dublin. “It also recognises what women’s rugby has achieved and can only be good for the game in Ireland.

“I would see it as recognition of all the hard work the Irish team and coaches have put in over the years.”

Ireland hope to retain their Six Nations title this season although the major women’s rugby event of 2014 is the 15-a-side World Cup, which is split between the French centre of excellence in Marcoussis and Paris in August. Awaiting Ireland in Pool B are Kazakhstan, USA and defending champions New Zealand.

Coghlan began her international career 12 years ago against Spain and was an inspirational figure this year, especially in their match against Scotland, which Ireland won 30-3 to seal their first Triple Crown.

“We were hockeyed back 12 years ago. But we’ve been getting better and better,” said Coghlan. “The last three years have seen younger players coming in and the game getting much stronger.”