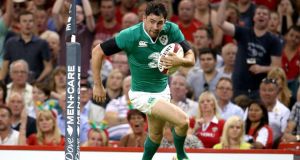 For Felix Jones, the sight of Tommy O’Donnell laid out and being treated for four minutes, before being stretchered off as he clutched Dr Eanna Falvey, must have been particularly poignant. Aside from being a Munster team-mate, Jones suffered a World Cup-ending broken ankle against France at the Aviva four years ago.

Most probably, like his team-mates, Jones didn’t look at O’Donnell being treated or having an oxygen mask placed over him. Most probably, he wouldn’t have needed to for the memories to come flooding back?

“Yeah of course,” admitted Jones. “We don’t know what the full story is there but my heart goes out to him. Hopefully it’s not as serious as it looked.

“There isn’t a huge number of people who have gone through what he could be experiencing now and there are no words that can describe it really.

“At the time four years ago I knew immediately it was gone. I tore a lisfranc ligament in my foot and I knew straight away. You put so much work into it so it was massively disappointing. It’s hard to describe.”

Jones says you can overcome the mental scars of such an injury. “I think you do. It’s certainly very difficult, just time I suppose, it’s different for different people. You get past it. Massive setbacks like that, massive injuries in people’s careers, can help build character and help define it.”

Jones maintained that he does not have to make the 31-man cut to fully extinguish the memory of four years ago. “No, myself personally no, I put that injury behind me a long time ago. But that doesn’t mean I don’t want to make this squad of course, absolutely not. I’ll be pushing as hard as I can to get in.”

Jones made one stunning counter-attack, generally ran well and scored a try, but there’s no such thing as the perfect performance, least of all on Joe Schmidt’s watch.

“There would be a couple of things I would be looking to improve from a personal point of view. In terms of the team, I don’t think there was an overwhelming sense, although the scoreline was large, there were plenty of things to be looking back on that we weren’t too pleased with.”

A good win with plenty more to work on then. “That’s probably a fair way of looking at it,” said Jones. “Not ideal, though, with Tommy getting hurt. That’s a fair assessment, coming out having won the game but know you’ve plenty to work on.”

Having led the team out on his 50th cap, and then lifted the match trophy along with Jamie Heaslip, Mike Ross commented: “It was a good start but there are going to be a few more tougher tests coming up, because we’ve got Scotland next and Wales again, and they probably play more of the team that was in the Six Nations.

Acutely disappointed with his own team’s performance, especially in the first-half, Warren Gatland said of Ireland’s display: “They are a team that retains possession well. They’ve got a template that works well for them. They get into your 22 and play pretty much a lot of one-pass rugby. They keep possession and pressurise you for turnovers. It wasn’t anything different.

“We are pretty happy we scored a couple of lovely tries and probably gifted Ireland some pretty soft tries. They didn’t play a huge amount of rugby against us. They played territory and played it well and they used a template they have been using for a while and it’s been successful.”