‘We can’t buy a trick at the moment,’ bemoans the frustrated Ireland coach

Gerry Thornley and Liam Toland of The Irish Times reflect on Ireland's disappointing 21-10 defeat to England in the Six Nations. Video: Gavin Cummiskey 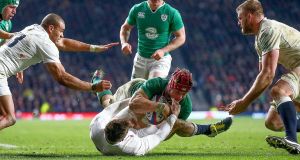 Joe Schmidt: “For them to get back ahead of us after we went 10-6 up was disappointing and then you lose a game because a ball slips out of a player’s hand (Henshaw) or because there seems to be a dark patch on the (television) when you are looking at a TMO decision (van der Flier’s grounding over the line) and it doesn’t fall your way.”

Joe Schmidt’s frustration was palpable. Ireland lost a game they might have won or at least been in contention at the final whistle but the visitors to Twickenham were left to rue an inability to convert opportunities; a theme that has become familiar from an Irish perspective in the Six Nations.

Fate, as is often the way when a team is struggling for a break, continues to look the other way. Josh van der Flier might have had a try, Robbie Henshaw too, while there were other moments when the officiating might have favoured the visiting team. Credit must also go to England’s scramble defence and the large dollop of good fortune they enjoyed in finishing on the right side of 50/50 decisions.

Schmidt isn’t oblivious to the shortcomings in some aspects of the Irish performance, something he addressed initially: “ We probably let them come back at us too easily. It is hard to stop them. I think there was probably a bit of fatigue from the first half where they put a lot of pressure on.

“For them to get back ahead of us after we went 10-6 up was disappointing and then you lose a game because a ball slips out of a player’s hand (Henshaw) or because there seems to be a dark patch on the (television) when you are looking at a TMO decision (van der Flier’s grounding over the line) and it doesn’t fall your way.

“They’re the fine margins because I think there were two teams that were relatively evenly matched in a number of ways. They squeezed up the lineout really well. That platform didn’t work for us to keep the pressure on. Once you are in the 22 and you have those opportunities you can’t release that valve too easily. They grabbed a few of those. They are the fine margins.”

On the issue of the lineout Ireland’s captain and hooker Rory Best didn’t sugar-coat his personal disappointment. “To turn over a couple of big opportunities five metres from their line is disappointing. We set up a couple of good mauls, when we did win the ball and probably should have gone over if it wasn’t for the infringements (by England players).

“It (the lineout) is something that we pride ourselves on. To turn those couple over is obviously bitterly disappointing, not only from a forward’s point of view but from my own point of view as well.”

Schmidt was asked about his take on the van der Flier grounding. “We saw that angle (that suggested the ball had been grounded). The players thought at that stage it was a try. Can’t buy a trick, at the moment. It’s frustrating, would have put us back in the game with five or six minutes to go and them a man down.

“That build up for Josh’s try came from a really good break by Ultan Dillane; we get quick ball there and we score. We have to be better; we have to get that support there, so that we don’t allow them to slow that down. We’ll give ourselves a better chance of converting those if we do have that support.”

On the issue of England fullback Mike Brown’s reckless kicks that left Ireland scrumhalf Conor Murray needing stitches the coach explained: “They have people who look at those things. I have never ever tried to influence that. They made a decision on the field and it is something they’ll look back at because Conor has stitches right next to his eye.

“That strategy (kicking out at the ball) is fraught with risk, particularly with players in close proximity but I know that Mike Brown would not have done it on purpose. He’s trying to connect with the ball. It is something that we don’t influence, it is for other people to determine whether he is culpable for being reckless or whatever.”

On a more positive note Schmidt appraised the impact of the three debutants, van der Flier, Stuart McCloskey and Dillane; the latter from the bench. “I thought Josh grew into the game and looked better and better as the game went on. I thought he has a big engine. He made a couple of telling tackles.

“He obviously carried the ball over the line. His ability to arrive and be positive was a real asset to us. Stu got into the game a little bit in the second half and showed the big strong carrier that he can be for us, There were a couple of times when he needed to take care of the ball a little bit better; it was a little bit loose.

“I thought they showed some real character defending in that first half and some real enterprise to create some super line breaks that we have to bet better at converting. That might be a bit of a broken record.

“There is a little bit of a transition period. We are building past that. The only thing I’d say is ‘don’t lose faith.’ Hopefully that will be sufficient to get people enthusiastic about what we do in the next two games.”