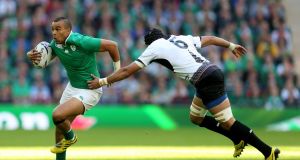 Wingers are the tallymen of rugby. It’s all about the figures. Tommy Bowe crossed for his 29th and 30th tries for his country and he’ll have enjoyed bringing a run of seven matches without one to an emphatic conclusion, the longest of his test career.

His last try in a green shirt came against Australia during the 2014 November test series - he had scored against the Springboks in his previous international two weeks earlier - and latterly has struggled with a dip in form.

There was no sign of that at Wembley. He was positive in every facet of the game, sharp in thought and voracious in appetite. On the opposite flank, Keith Earls, was equally eye catching, scoring two tries and posing a threat every time he touched the ball.

His instincts are excellent and there were several times when his footwork took him away from both the touchline and opponents to sustain the momentum in an Ireland attack. The umbilical link in the backfield was fullback Simon Zebo, who delighted with his outrageous footballing skills.

The link between the three players gave Ireland more of a cutting edge as they engineered space for one another with Zebo in particular, highly creative in this respect.

Ireland secondrow Donnacha Ryan, his team’s joint second highest tackler with 10, was a little preoccupied with the muscular and hard charging Romanian forwards to full appreciate the fleet-footed wide boys but he did venture: “To be honest, I was in the rucks a lot so all I could see was them fielding balls and stuff.

“I thought they were brilliant. I thought Keith Earls was fantastic after he had a really long lay-off. He was electric. (Simon) Zebo was as well. He’s such a colourful player to watch. He just lights it up. Every time he gets the ball he wants to do exciting things.

“Tommy Bowe as well. He had a fantastic game in the air. He was great. They’re competing for their places as well. It just makes selection different and it drives standards right throughout the squad.”

The issue of Ireland’s squad culture was a point emphasised by another try scorer, Chris Henry, another who impressed having been given the chance of a start. “For me it was a great opportunity to get 80 minutes there and for lads who maybe thought they would start last week and didn’t.

“Hopefully it just causes headaches for Joe (Schmidt). Paulie (O’Connell) talked about it from the beginning of the tournament. You don’t win things with the starting 15, it is about the whole squad buying into it and we are doing that.

“The two people I felt were under the most pressure - Devin Toner and Tommy Bowe - I thought both of them were outstanding considering that pressure they must have felt. They have shown they are two quality players and they have given Joe some headaches for next week.”

Henry considered when asked about his own performance: “I’m not sure. I enjoyed getting the ball and going forward a bit more. Perhaps in other games I did more of the dirty work, the rucking and defensive duties.

“The ball just came to me a bit more and that is something I have tried to work on a bit on pre-season, keep my feet alive. My primary job is still to generate quick ruck ball for this team and I did give away one penalty with a tackle around the neck, which is one of these new rules that they are coming down hard on, so I am disappointed with that. In general though, I’m reasonably happy.”

“Japan showed that tier two nations are getting better. We wanted to be machine-like in the way we go about our games. It doesn’t matter who we are playing. We stick to our process and our game plan and there was plenty of nerves among the starting team but we stuck to our game-plan.”

The road gets steeper from here.