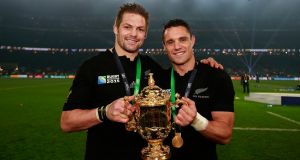 New Zealand captain Richie McCaw and Dan Carter with the Webb Ellis Cup after the All Blacks’ victory over Australia at Twickenham. Photograph: Phil Walter/Getty Images

Not like this. That’s what Dan Carter thought when writhing in agony on home soil four years ago. It can’t end at a training session on the eve of the 2011 World Cup quarter-final against Argentina.

But end it did. Just like, in 2007, those model features and big brown eyes had a horrified look as he watched France produce a shock that reverberated around the world. He was helpless after being forced off with a calf injury.

Or like 2003, as he again sat in the stand, patiently waiting for Carlos Spencer’s unpredictable magic to subside.

The most lucrative contracts in rugby were offered to him in 2011. France or Japan? Carter spurned them all, perhaps forewarned by his abortive Perpignan sojourn in 2009 when he tore his Achilles, re-signing for four more years.

“The beauty of New Zealand rugby is we have a lot of depth,” said Carter, standing before us late Saturday in his socks, perhaps not wanting to take the black gear off one last time. “People thought after the last World Cup that the trend is you don’t back it up.”

New Zealand will never lack for player depth but they probably wouldn’t have beaten South Africa or Australia at this World Cup if it wasn’t for Carter. He ensured they backed it up when orchestrating the demolition of France in Cardiff and he executed the crucial plays in both semi-final and final.

It so nearly was nothing to do with him at all. But fate, finally, smiled on the boyish features of a man we knew was better than anyone who has come before when he shredded the Lions during the second Test match in 2005.

That was 10 long years ago. No man maintains such magical form. Even when Cruden’s knee crumpled, there was no guarantee Carter would make the World Cup squad. His form hadn’t been good enough to shift Slade from the Crusaders 10 jersey so he played where once did, in the midfield, made his tackles (he made 12 on Saturday night) and stayed fit for the first time in three years.

“As I’ve said before, he’s enhanced the jersey,” said Steve Hansen on Friday. “When you start out as an All Black, that’s one of the greatest things you can do. Can I improve this jersey from when I picked it up.

“And in his position it’s a pretty remarkable thing to be able to do, when you think about [Grant] Fox, [Earle] Kirton and [Andrew] Mehrtens – when those guys left they all said we couldn’t replace them.

“So, a little fellah from Southbridge has done that. He brought a new dimension to first-fives, he has brought tackling. I don’t think Foxy made one in his career, Mehrts didn’t make too many either to be quite honest, but the modern day first-five-eight has to tackle and that’s a legacy he’s left for all first-fives.

“He has raw courage, his goal-kicking has been great, and the other thing I admire about him is that he’s gone through a bit of adversity in the last few years and it would have been easy, since he’s done everything in the game, to walk away and say ‘well, enough is enough’.”

But instead, he wanted to finish playing well and he’s done that.”

Carter countered the 12 tackle plaudits with: “I missed a couple when they scored their try though.”

In August he tore the Wallabies asunder in the last ever match at Eden Park. Last for him, for Richie McCaw, Ma’a Nonu, Conrad Smith and Keven Mealamu too.

This time he surgically opened them up.

Before this tournament Sexton was being billed as the best outhalf in the world. Maybe, one day, he will get a chance to be that but everyone overlooked the little 33-year-old from Southbridge.

It seemed like the drop goal against the Springboks, with Jerome Kaino in the sin-bin, would never be bettered. The very next weekend he does it again, except from farther out. “The Australians really clawed their way back into the game. Scored a couple of tries when we were down to 14 men. The drop goal gave us a bit of breathing space in a critical part of the game, it gave us confidence.”

Kieran Read wrecked his ankle falling to earth in an early lineout and could barely walk through the mixed zone. It was amazing that he came at all but that’s the All Black way; every duty, even media, is approached with the same high level of professionalism (and patience).

“Aw, he was great. It’s well documented about the heart breakers he has had at World Cups. We wanted to do it for him but he just led us around the field.”

Read will be the captain now, the man who must lead without Carter and McCaw.

“Yeah, we’ll get to that when we turn up next year. Really proud of the legacy those lads leave this team.”

Carter always wanted to hit goal with his right foot. He knew he could so after Barrett’s cool bump and run late try, at the end, the last strike, in a World Cup final, he did it.

Carter now becomes the first millionaire rugby player with his imminent move to Paris as Johnny Sexton’s replacement at Racing Metró 92. European rugby has got itself a beautiful gift this winter and the next.

“I’ve worked extremely hard in the last four years to get where I am today. I didn’t know if I would be here or not so it is a dream come true.”