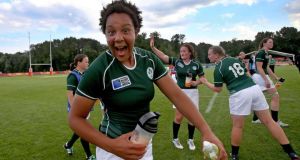 “I didn’t tell a lie, did I?” he asked, when it was pointed out that he had warned us that the Americans were – to say the least – a physical side.

At the beginning of both halves, Ireland struggled to contain a team ranked two places above them in the world.

But they took the many punches the US threw at them for a crucial Pool B win in France.

“You run straight into an American lady you’re going to be in trouble. It’s all about getting to the sides of them, or low around their knees.

“You saw the pick and go. We didn’t intend doing that but it worked for us today.”

Playing for territory and getting the US back three to turn was the name of the game, although a tightness at the start – particularly in the lineout – threatened to undermine that approach.

Leading 20-10 at half-time thanks to tries from Ailis Egan and Niamh Briggs, a disastrous start to the second half was not part of the plan either.

Doyle said he would be having strong words for the “pure lack of concentration” on show at that stage, when Carmen Farmer’s converted try made it a three-point game. Thereafter though, Ireland played the US at their own game.

“America pride themselves on suffocating,” Doyle said. “In a funny way, we suffocated them towards the end of the game, say in the last 20-25 minutes, through territory.”

“The heat obviously doesn’t help,” she said. “In fairness to America they’re very physical. We knew they were going to be and we prepared for it but it still didn’t stop them at times.

“They got momentum and I think in the first half they had 15 possessions and they got 13 gain lines on us, which is definitely something that we need to look at going forward.”

It will not get any easier for Ireland from here.

On Tuesday they face a daunting assignment when take on defending world champions New Zealand, who ran in 13 tries in their 79-5 win over Kazakhstan yesterday.