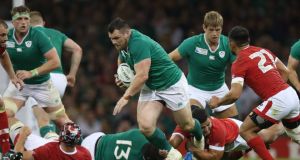 Cian Healy made his return to the Ireland team against Canada in Cardiff. Photograph: Billy Stickland/Inpho

“He’s a freak, man.” Jamie Heaslip is describing his roommate, his best mate, the man who he strives alongside for greatness, the prop Ireland must have in the trenches against Romania, Italy, France and beyond.

Cian Healy is getting there but the 28-year-old colossus wasn’t his usual confident self when assessing the latest of so many returns at the Millennium Stadium.

“I didn’t feel great,” said Healy of his 19-minute 52nd cap that almost yielded a try. “I was a bit more nervous than I thought I was going to be. The final whistle I was happy about. It’s been a long road. Twenty-four-seven with medics, in and out of rehab the whole time. To get over that first hurdle and have it behind me was nice.”

The instructions were clear: don’t be The Church Irish fans revere. “Joe and the lads were just telling me to fit in, don’t do anything magic, that was my role . . . not start playing my own game.”

Not yet anyway. Baby steps before rhinoceros charges.

There’s good reason. His injuries since the 2013 Lions tour alone have required car-crash rehabilitation. Gammy ankles. Hamstring torn off the bone. Worst of all was the constant burning agony from neck to right hand that required a third invasive surgery in two years.

Rugby’s relevance, even a World Cup, pales when everyday life becomes a prison of pain.

“It was a shock when they said you are going into surgery tomorrow,” said Healy of last May’s quick decision. “There’s been something there for a while, a bit of nerve damage, so it was best looked after. You can’t play rugby or live like that.

“Nerve pain is a bit different than anything else. It is constantly at you, burning in the background. It’s not like a broken arm pain or anything like that, it’s very uncomfortable. For quality of life you have to have those things fixed up.”

After only four months Healy has returned. Until recent weeks all he could do was run – so they flogged him – with no scrummaging permitted until the feeling in his right hand returned.

“It’s all good. It’s about building up all the small muscles, the big forearm muscles are pretty easy to build, but it’s all the small ones that you can’t do weights with, they’re hard to build up. They’re what I’m working on.”

It’s about balance now; his importance to Ireland’s power game is well known but any decision on further exposure will require the conclave of Joe Schmidt, Greg Feek, Dr Eanna Falvey, the physios and Jason Cowman’s conditioners.

Back with a bang

“He’s had a tough road to recovery but he is back with a bang,” said Heaslip. “I was rooming with him the last two months and he’s been pretty giddy to have the opportunity to get out there and it was great to see. I was happy it was a scrum that he was coming out to and he made his presence known on that field. That was why we were so keen to get him back.”

Only Seán O’Brien and Iain Henderson stampede in similar fashion.

“Llama is an athletic beast,” said Heaslip, revealing Henderson’s nickname. “He just seems to be able to carry hard and always get impetus after contact, no matter what.

“It lifts the standard up when someone like Hendy carries well. It gees the rest of us up and you want to get on the ball yourself whatever your job might be, whether it’s a barrel at a ruck, carrying the next ball. They’re moments in the game that pick up the rest of the team.”

Those, and Healy’s return. The prop craves minutes against Romania now.

“I’ll take any time I can get. We strive for greatness in all our plays and having everything executed pretty well, there is still stuff to work on, but we’re happy with some of the stuff. It worked out there and it got us scores.”

Would have been nice to get that try near the end?

“Yeah, it would have been nice but I dropped it!”