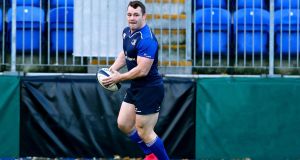 Cian Healy is considering an offer to join Worcester Warriors, and the three-year deal being offered to the Irish loosehead, who is out of contract at the end of this season, is believed to be substantially more than the new contract being put to him by the IRFU.

Unlike previous approaches from English sides and rumours of impending departure, notably Marty Moore and Keith Earls, negotiations are not at an advanced stage.

Nonetheless, on foot of losing Moore to a three-year deal with Wasps from next season, there remains a risk of Leinster now losing another international prop in his 20s at a time when the option of signing props from abroad is not being sanctioned by the IRFU.

A key difference with the Moore situation, however, is that Healy is negotiating a central, international contract as opposed to a provincial contract (as was the case with Moore) and thus is dealing with the union.

Of course, whether the player concerned is negotiating a provincial or international contract, those discussions can involve both the union and the player’s province, as well as the Ireland international management, as happened with Moore, Earls and Conor Murray.

As things stand though, the ball does appear to lie in the IRFU’s court, albeit that Leinster can conceivably influence matters, as was the case in their successful negotiations to bring Johnny Sexton back from Racing Metro.

Although he has 56 caps to his name, the 28-year-old Healy has had a tough time of things in the last couple of seasons with injuries, having recovered from an operation to a disc in his neck last May.

He feared the injury could leave him paralysed without an operation, and after defying odds in returning to play a part in Ireland’s World Cup, Healy will be sidelined for at least the opening two rounds of the Six Nations because of a knee injury which required surgery.

After five seasons as a virtual ever-present for Ireland, Healy has played in just nine Tests over the last two seasons, starting only four of them, while making a mere eight starts for Leinster in the same timeframe.

Nonetheless, however attractive the offer from Worcester, joining the Premiership club would be a questionable move for a player who nurtures international and Lions’ ambitions in the next three seasons.

Worcester have lost eight of 10 matches this season, and sit 10th in the Premiership table, just four points above bottom-placed London Irish.