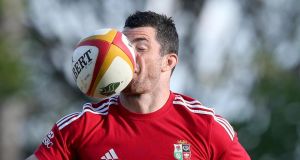 Akin to the Rolling Stones on tour, Brian O’Driscoll tends to revisit big venues for encores. Tomorrow, he begins his fourth tour where he made his Lions debut, in Perth’s Subiaco Oval a dozen years ago, and while he may not be as venerable as Jagger and the lads, this very definitely will be his last attempt at getting the ultimate satisfaction of a Lions Test series win.

Back then, as a 22-year-old on the cusp of greatness, O’Driscoll was played at fullback for the only time in his career in one of Graham Henry’s more curious decisions. Thereafter reverting to outside centre, O’Driscoll would score a sensational try from halfway in the first Test when waltzing through the Wallabies midfield, and a legend was born.

With the memory of that day and more besides, O’Driscoll makes little secret of his love for Australia; be it the country itself, the people, the climate, and the challenge of invariably having to out-think them as well as outmuscle them.

“All of those things make it an exciting proposition. I have fond memories of good days, some not so good days and some of my best memories of rugby are playing against Australia and in Australia,” he said.

That try in the first Test a dozen years ago, the Lions seventh Test win out of seven meetings with the Wallabies in Brisbane, is also a reference point for his Lions’ career. “That and the ferociousness of the second Test in South Africa and also you can’t get away from what happened in New Zealand. There is a mixture depending on people’s mood, depending on what they want to talk about. Not just 01 though. I got my first cap against Australia in 99 playing against a couple of heroes of mine particularly in Tim Horan. To be a 20-year-old playing against guys of that calibre was pretty nerve wracking but pretty exciting.”

Winning series
However, as he admits himself, to be considered a true Lions legend requires being part of a winning series, something which, he stressed yesterday, no player in this squad can claim.

Hence, his new buzzword is “ruthless”. Captaining the Lions again, as he did in the fateful tour of ‘05 to New Zealand, and in the second game of the ‘09 tour to South Africa, when leading the Lions to a decidedly ruthless 74-10 win over the Golden Lions, O’Driscoll leads out a side containing eight Irishmen, but the attitude has to come from everyone.

“It is absolutely not just up to me. It is up to everyone; Sam (Warburton) who’s driving it, the guys who’ve been on previous tours understand it. But guys being on their first tours understand it too. It is part of being professional.

“You tend not to be able to tip away to the Test series and be phenomenal,” he added. “It is a rarity. You have really got to work towards building your game plan, your defensive systems, your kicking game; all the different dimensions of the game so when you do get to the Test they are at a very high level and you are able to kick it on to the next level.”

Looking as chiselled as he did a dozen years ago, helpfully Warren Gatland has also naming him at 13 outside Manu Tuilagi, a partnership which excites him.

O’Driscoll has been struck, in general, by the Welsh players’ clear understanding of the way they like to play, which is akin to the Lions brand, with plenty of heads-up rugby, along with their confidence and sense of fun.

“The attributes that they bring, added to those of the top players from the other countries, marries the squad together quite nicely.”

Allied to this has been some tough training. “That was a really hard week last week in those conditions. I think yesterday our session peaked at 38 degrees. So whatever the humidity might have been it was a tough session. Those sort of sessions will stand to you when you’re toughing it out with the guys.

‘Weakest link’
“I think that’s how you get to know one another well and really understand how much you’re willing to dig for one another and not be the weakest link.”

The one black mark on an otherwise landmark day for Irish rugby in a Lions’ context was the news that the tight hamstring Rob Kearney suffered in the warm-up to the Rabo PRO12 final is actually a grade one tear.

Thus, whereas tour skipper Sam Warburton and Gethin Jenkins are expected to play against the Queensland Reds on Saturday, Kearney has already been ruled out.

“Rob Kearney is a little bit of a concern for us at the moment to be honest,” admitted Gatland, adding that Kearney would have “markers”, rather than deadlines, though presumably he would need to be playing by Saturday week against the Waratahs, which ought to be within his compass. But as Gatland admitted, the time afforded Kearney would be complicated if there were any other minor injuries amongst the outside backs.