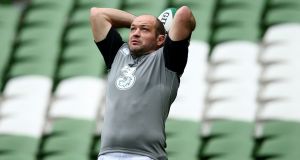 Rory Best: Candidacy will not have been harmed by reports of his half-time rallying call which contributed to Ulster’s comeback from 23-0 down to win in Oyannax . Photograph: Dan Sheridan/Inpho

Rory Best is the odds-on favourite to be named as the next captain of the Irish rugby team when Joe Schmidt announces a squad of around 36 or 37 players today for the opening two matches at home to Wales and away to France.

The 33-year-old Ulster hooker has hardened from 5/4 to 4/7 favourite in the last couple of weeks. With 89 caps he is the most experienced member of the squad following the retirement of Paul O’Connell, who led Ireland to back-to-back Six Nations titles over the last two seasons before bowing out after the World Cup.

Although Best’s four previous games as Irish captain all pre-date Schmidt’s tenure, he has always been a highly valued member of the leadership group. As he is the Ulster skipper, that would leave him with a heavy load which even, for the most part, was deemed too much for Brian O’Driscoll and O’Connell.

But Best’s candidacy won’t have been harmed in any way by reports of his half-time rallying call which contributed to Ulster’s comeback from 23-0 down to win in Oyannax last Sunday week.

Interest in the captaincy is more acute as this will be the first Six Nations campaign since 1999 not featuring either O’Driscoll or O’Connell, and thus the first without either of them as captain since 2004.

The one exception was in 2013 when Declan Kidney surprisingly retained Jamie Heaslip as captain from the November series in the absence of O’Connell despite the return from injury of O’Driscoll.

Heaslip is the 5/2 second favourite, having been Schmidt’s go-to alternative at Leinster and Ireland. He has captained Ireland 12 times, up to and including the World Cup quarter-final against Argentina last time out.

He is closely followed by Sean O’Brien, a real dark horse contender. Another certain starter when fit, at 28 he would have the credential and ability to lead Ireland for the next four-year World Cup cycle.

O’Brien led Ireland in the World Cup warm-up win over Scotland last August, although there is a view that he might be best served being allowed to concentrate more on his own game, and Schmidt might take a similar view of Johnny Sexton. Aside from being the chief strategist and goal-kicker, he is a de facto leader in any case.

The squad is likely to feature plenty of familiar faces, featuring 25 of the 31-man World Cup squad, as well as the two late call-ups, Mike McCarthy and Rhys Ruddock.

The half dozen exceptions are O’Connell and the injured quintet of Peter O’Mahony, Iain Henderson, Tommy Bowe, Darren Cave and Mike Ross, for whom these opening two games have probably come too soon after his hamstring tear, before a probable return at that juncture.

Two uncapped players who may be included are the newly qualified Munster captain CJ Stander and the upwardly mobile Ulster centre Stuart McCloskey.

Schmidt is likely to resist including the likes of Josh van der Flier and Garry Ringrose, each of whom made their first European Champions Cup starts in Leinster’s defeat of Bath last Saturday, until they obtain more experience.

He is likely to do this even though there would be a strong argument for exposing a specialist openside such as van der Flier to the squad environment given the presence of about seven back-rowers.

Others liable to return to the fray are: James Cronin, Marty Moore, Dave Foley, Robbie Diack, Tommy O’Donnell, Kieron Marmion, Luke Marshall and Andrew Trimble. Moore, O’Donnell, Marshall and Trimble were effectively ruled out of the World Cup through injury and the swelling of Ulster’s representation is a reflection of their superior form in Europe to Munster and Leinster.

Wales, Ireland’s opponents on the opening weekend, named their squad on Tuesday with Scarlets scrumhalf Aled Davies the only uncapped player included.

Moreover, Warren Gatland wasted little time in getting the phoney war started ahead of the match at the Aviva, suggesting that Schmidt’s side will start as tournament favourites, not least because “one of the things about the Irish is they like to be written off”.