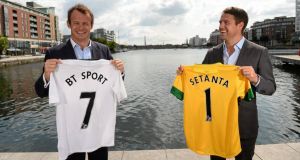 Former Liverpool and Manchester United striker Michael Owen and former British and Irish Lions star Austin Healey at the announcement that Setanta Sports has added BT Sport and ESPN to its line up for the next three seasons. Photograph: David Maher / Sportsfile

Former England international and British Lion Austin Healey was never short of an opinion as a player, a character trait that has accompanied his career to rugby analyst with BT Sport.

He famously indulged in a little trash talking of Wallaby lock Justin Harrison in a newspaper column during the 2001 Lions tour to Australia using words like “plank” and “ape”. The Australian would have the last word by dint of his performance on debut in helping the Wallabies to a series win in the decisive third Test.

In Dublin yesterday, Healey was typically forthright on a variety of topics that touched on a couple of current Lions, Paul O’Connell and Brian O’Driscoll. When asked about whether O’Connell’s tour ending arm injury would have a big bearing on the final two Tests, the former Leicester Tigers played admitted: “He is the closest thing you guys have ever had to a Martin Johnson. Martin was hardly Churchillian in his speeches, but he rarely needed to say anything.

“It was just a look he would give you . . . You sense with O’Connell he is that kind of character; it is not do as I say, it is do as I do. He’ll be missed massively.

“You will see that in press conferences, the Lions will try and bat it off but the reality is that if you lose a player of that quality and of that persona any Test series will be difficult, especially with two to go. I’m not sure how long into the game he broke his arm. It wouldn’t surprise me if it was after five minutes. It tells you a lot about the man, to play in that environment for that long.”

Brian has learned
Healey also spoke about another former Lions captain, O’Driscoll, and how his role has changed as a player.

“I think what Brian has learned over the past few years is to pass. And that’s quite important in rugby. I remember playing with him in 2001 with the Lions and he didn’t like passing because he was so good and so fast he didn’t really need to. But, if you were playing on the wing outside him, it was really frustrating.

“Now, he has worked out that, if he passes, he is not quite as quick as he used to be but he’s . . . a phenomenal rugby player.

“Everybody thinks it is the flash stuff around the field but he is a seven in the centre as well, he is over the ball.

“The one he got pinged on at the weekend wasn’t a penalty, it wasn’t his fault; I think (Mike) Phillips was underneath clinging on.

“He is someone Ireland and the world of rugby can be proud of, an enormous talent and an absolute icon here.”

“I think it would be better for the whole ethos of the Lions that, if it is to be the pinnacle of rugby, then that it is about the grassroots, camaraderie and spreading the word while you’re over there. It’s not high-level, highly-paid players going over there to play just three games in a country where they have been many times before. I would like to see the Lions go down the Pacific Rim and play Canada, the USA, Samoa, Fiji, Tonga, the Pacific Islands and then maybe go to Australia and give them one Test match. If they are going to disrespect our traditions now then that’s it, they don’t get another tour.”

So who will win this series. “This time around, I can’t see where it is going to come from for Australia; I don’t know where that spark will be . . . the last time the Lions had a kicking fullback we won the series. You take (Leigh) Halfpenny and put him in the Australian side, I think they win the series.”

Michael Darragh Macauley calls time on Dublin career 11:27
Rory McIlroy bursts out of the blocks with a 64 in Abu Dhabi 11:32
Uefa considering switch to single host venue for Euro 2020 10:15
Pogba wins it for United; Dave Hannigan recalls first taste of emigrant life 07:04
Hurling between the high rise flats: My first glimpse of the emigrant life 06:51
Crossword Get access to over 6,000 interactive crosswords