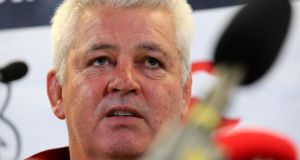 Day is among five locks in the group, with Francis joined by fellow props Paul James, Gethin Jenkins, Samson Lee and Aaron Jarvis.

Wales head coach Warren Gatland has named only two hookers, though — Scott Baldwin and Ken Owens — with Kristian Dacey missing out in a squad that was announced at the Millennium Stadium by Welsh Rugby Union chairman Gareth Davies.

Jones, one of Wales’ most influential players, is in the squad, but is unlikely to be fit for a couple of weeks.

There is a place among the back-row contingent for Ospreys forward James King — Gloucester flanker Ross Moriarty is among those who misses out — while Gatland has selected prop Samson Lee and wing Liam Williams.

Lee has not played since suffering an Achilles tendon injury in March, while Williams has been troubled by a foot injury, but Gatland has decided to go with both of them in his squad.

Bristol utility back Matthew Morgan also features in a squad that will be captained by Wales’ 2011 World Cup skipper Sam Warburton.

Gatland said: “We have ended up going for five second-rows, and really because it is such an attritional position, and as a result probably Kristian (Dacey) has been unlucky to miss out at this stage.

“Alun-Wyn Jones picked up a little bit of a medial strain on the weekend, which is a couple of weeks, Luke Charteris got a bang on the leg, so we have kind of looked at the squad and said that if players pick up knocks we’ve got cover for them.

“Some of the decisions were the toss of a coin. Those players that have missed out, you feel for them massively.

“It’s a couple of weeks (for Jones). That engine room is so important for us. I thought he was outstanding on the weekend.

“It is incredibly disappointing for those players that miss out. It’s hard, but you have got to accept that is the nature of professional sport and we are entrusted to make what we believe are the right calls.

“Matthew Morgan is someone we think has got a bit of x-factor. He’s not six foot four and 115 kgs, he’s quick and has got some skill, and that x-factor is important. He can cover a few positions as well.

“I think there is a nice balance in the squad between the physicality that we can bring, which we saw on the weekend, and hopefully with some skill as well. Even though Saturday was a pretty tight game, we off-loaded pretty well.”

Warburton added: “I have seen first hand how hard the guys have trained.

“The effort against Ireland on the weekend showed all that teamwork we have done together for the last two or three months has paid off. It was a really impressive performance, and a massive confidence-boost for us going in to the World Cup.”

Moriarty has missed out on following his father Paul and uncle Richard into a World Cup — they were both part of the 1987 campaign — and Gatland added: “Ross has come in and the more time has spent with us, the better he has got.

“He has got himself into pretty good physical shape — he understands what we are looking for — but he has been unlucky. He is definitely going to be a player of the future.”

Gatland made his presence felt in selection earlier this month by cutting British and Irish Lions trio Richard Hibbard, Mike Phillips and James Hook from his training squad, but another Lion — wing Alex Cuthbert — has made the final cut despite many pundits feeling that he might have faced an uphill task.

Reflecting on Lee’s current situation, Gatland added: “Maybe Samson for Uruguay (on September 20th). He is up and running and not too far away, and it’s just making sure we don’t push him too hard, too early.

“Liam had a little bit of foot pain last week, and hopefully he will be up and running again this week. We have just got to monitor him.”

And looking ahead to a World Cup pool that also includes England and Australia, Gatland said: “I am looking forward to the game next weekend between England and Ireland, because whoever loses is going to lose two in a row which puts them under a little bit of pressure. It’s a massive game for England and Ireland.

“This group potentially is going to come down to the bounce of the ball and a refereeing decision, and that’s the way it is.”