All Blacks to harness emotion as they remember missing brother Lomu 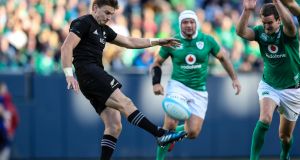 A natural tendency of Ireland has always been to get behind a cause, said New Zealand coach Steve Hansen. Obliquely referring to the figure eight Ireland used to face down the haka in Chicago, Hansen was at once respecting Ireland’s ability to convert some of the emotional charge of Anthony Foley’s untimely death into a memorable performance and also harnessing that same energy for his All Black team.

Hansen added that the Irish coaching staff were challenging the players to understand the how and why and when of rugby, which he noted “are not big words but important when it comes to playing footy”.

One year ago today (Friday 18th) Jonah Lomu died from a heart attack brought on from the complications of the kidney disease he carried with him for his entire career. Lomu is possibly the biggest name in world rugby and in All Black culture.

Yesterday world player of the year Beauden Barrett and winger Julian Savea added the chorus line to Hansen’s assertion that Soldier Field was where the All Blacks let down their heritage and let down Lomu, who at 40 years of age was two years younger than Foley when he died.

The New Zealand earthquake was also evoked. The mood music in Castleknock was not frosty All Black precision. They were strumming on sentiment. Fuelling that need, the All Blacks seem intent on harnessing whatever it was Ireland took from their fallen brother and as much as the coolly detached Barrett says focus and clarity will prevail, there will be emotion.

“I know personally him [Lomu] being a great Hurricane,” said the All Black and Hurricane outhalf. “He was also a great All Black. He’s huge in the All Black history. We are aware of the anniversary and we don’t need any more motivation but we are thinking of him and the impact he had on the All Black jersey.

“He’s a big part of All Black history,” said Savea. “No doubt the boys have been talking about it. But it’s a privilege and an honour and we will be taking that motivation into this week. We know what he has done in this jersey. We know, I guess, we’ve got to bring that back.”

New Zealand now have a cause. But Barrett, faithfully staying in character for his method approach to “getting right” on the day, will rise to absolutely nothing. On being voted the best player in the world this week, his response was as close to a verbal shrug as possible

“It’s just business as usual. It’s not going to help me on Saturday,” he said, maybe also knowing he’s the fifth consecutive All Black to win it.

On Jonah’s death, the terrible earthquake, the breaking of a winning streak by Ireland and the shambles, as they see it, of Chicago, there was more chilling sangfroid.

“You can cross that white line and just focus on playing footy. Those things don’t cross your mind,” he says.

Barrett plays like he has ice in his veins. It appears now that he prepares for matches in the same way.

“There is always the danger of being complacent. You know in the All Blacks, we always do our best to keep each other honest, not get too far ahead of ourselves, be humble. I’d like to think we were like that in Chicago. We just didn’t turn up and be where we need to be.

“It’s about getting that balance right. You can’t play the game today. It’s on Saturday. For every player it’s different. Some like to let it build up. I like to stay a little bit more clear. A little bit today, a little bit on Saturday, I don’t want to get over-hyped.”

In his world of playing at five eighths, calm is good. Control is king. Clear thinking helps the team’s cause and they will be looking to him for that quality.

When New Zealand came storming back in 2013 to snatch a win in the last play at Lansdowne Road, they possessed those tools. For some reason, which they have not identified, they were unable to squeeze Ireland in the US with their pounds-per-square-inch intensity, their recycling machine that always finds a fracture. That, always the trump card in their winning game, went missing.

“What was different was we didn’t take our opportunities, because there were those opportunities,” said Barrett. “Perhaps we weren’t as calm and decisive as we needed to be to get the result we wanted.

“We approach things one Test at a time. We don’t really do things for the records. It’s all about preparing well to put in a performance we are proud of each week. We don’t think too far ahead of ourselves.”

It’s true. But not just Ireland, every team can do with a cause.