Kiwi will remain in charge until after the Lions Tour to New Zealand in 2017, at least 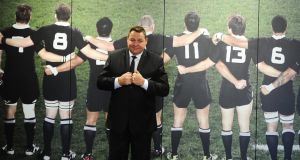 All Blacks coach Steve Hansen has signed a contract extension until 2017, ensuring he will remain in charge of the national side until after the British and Irish Lions tour of New Zealand.

The 55-year-old Hansen’s original contract had been until the end of the 2015 World Cup, but New Zealand Rugby Union chief executive Steve Tew had indicated last month they were in talks to extend it beyond the global showpiece.

“Steve is the first All Blacks coach to be given a contract extension beyond a rugby World Cup which demonstrates just how much faith the Board and our wider organisation, together with the All Blacks players and management, have in him,” Tew said in a statement. “To have him re-sign as head coach through to 2017 gives the All Blacks the continuity they will need as they make the transition into 2016 and beyond, following next year’s rugby World Cup.”

Hansen succeeded Graham Henry in the role after the successful World Cup campaign in 2011. He had been assistant to Henry since 2004.

The All Blacks have won 38 of their 42 tests in Hansen’s tenure, with two losses and two draws the only blots on his copybook, and he has been named World Rugby’s coach of the year for three successive years.

The decision had been widely expected in New Zealand where a number of veteran players are expected to either retire or seek lucrative offshore contracts following the World Cup and the Lions tour looms as the All Blacks’ biggest series before the 2019 World Cup in Japan.

“After getting the support of my family and various team personnel to continue, I asked myself if I still had the hunger and desire to continue in the role, which I do, so the decision to continue became a no-brainer, because there is no better job in world rugby,”

Hansen said. “I am really looking forward to the future, starting with 2015 and the opportunity and challenge that awaits us at the rugby World Cup.”

While the news is, no doubt, good for New Zealand, the IRFU will welcome it, too, as it would seemingly rule out the possibility of Ireland coach Joe Schmidt being lured home any time soon.