Aaron Smith the man who keeps All Black machine ticking over 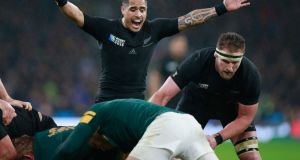 Go through the history of the Rugby World Cup and aside from having a celebrated number 10, the eventual champions invariably have the world’s best scrumhalf at the time as well. David Kirk and Nick Farr-Jones captained their sides to the Webb Ellis trophy, and were followed by Joost van der Westhuizen, George Gregan, Matt Dawson and Fourie du Preez. Stellar names and nines.

Admittedly, Piri Weepu and Stephen Donald kinda bucked that trend in 2011, in what was a non-vintage tournament tournament for halves once Daniel Carter broke down. The French had a good nine in Morgan Parra, and played him in an ill-fitting 10.

But normal service appears to have been restored. Over the last four years, Aaron Smith has been the best scrumhalf in the world. To anyone who saw his debut against Ireland in Eden Park in June 2012, this is no surprise.

Smith had it all, a low centre of gravity and low to the ball in the manner of traditional scrumhalves, with a real break, very good support trailers, a strong kicking game and someone who punches well above his weight in contact – witness his eight tackles against the Springboks.

According to the New Zealand broadcaster and journalist Nigel Yalden: “When it comes to comparisons in New Zealand, [Stephen] Bachop was one, but the benchmark has always been Chris Laidlaw. ”

Laidlaw played 20 Tests in the 1960s after making his All Blacks debut at 19. “Laidlaw’s pass was just a work of art, so a lot of people have made comparisons and said that [Smith’s] is as good as Chris Laidlaw’s.”

Needless to say, Peter Stringer (whose pass is assuredly now the benchmark in Irish rugby) admires the smallest man on the pitch in Saturday’s final.

“I love watching Aaron Smith play,” he declared to the 42.ie website this week. “I always identify with the speed of pass in a scrumhalf and I really enjoy seeing snappy service from a nine. Smith is the best passer in the world right now and he’s going to have a huge say in Saturday’s World Cup final. At 5ft 7ins, the All Blacks scrumhalf is the same height as me and he plays the game the way I like to play it. Get in, move the ball away, give your outhalf time to create.”

Smith is a former apprentice hairdresser. Born in Fielding in Manawatu, Smith went to Fielding High School, which also produced the Whitelocks.

When he broke into the Manawatu side at the age of 19 in 2008, he was largely unknown, although quickly made an impact with fellow debutant Aaron Cruden as game-changing halves off the bench.

First-choice in 2009 with Manawatu, he was brought into the Highlanders in 2011 by Jamie Joseph, who had coached him with the New Zealand Maoris.

A lively, cheeky, good-humoured lad, Smith took to Test rugby like the proverbial duck to water, and has played 46 of the 56 Tests under Steve Hansen in the last four years.

“It’s been pretty awesome,” said Smith this week. “I remember watching the last World Cup and how amazing it was. I was just about to go into Super Rugby and put my best foot forward and was able to get chosen for this amazing team. Time flies when you’re having fun and I’ve had some amazing times in this team.

“I had a little moment after the game the other day thinking ‘it’s here’, about how all the talk over the previous four years had been always about heading towards this.

“As a player, you always have to put it to the back of your mind but it’s finally at a point now when we can talk about it because we’ve earned the right to play in the game that everyone wants to be a part of.”

Will Genia had gone into the 2011 World Cup as seemingly the best scrumhalf in the world, having played an integral part in both the Queensland Reds first Super Rugby title (when both his peers and the Australian writers made him the player of the year) and Australia’s Tri-Nations triumph. But the Wallabies ran into the All Blacks on their best day of the tournament in the semi-finals.

Knee injuries and a loss of form contributed to Genia missing chunks of games over the last three years, including much of this year’s Rugby Championship, and he admitted to being “embarrassed” when named in the Wallabies World Cup squad ahead of Nic White after the latter’s match-winning cameo against the All Blacks.

But he’s nailed down the starting nine jersey and, while less of a running threat, is more of a linkman whose decision-making, kicking game and covering defence have been features of Australia’s advance. But there was a distinct whiff of intent when Genia was asked about Smith during the week.

Like the game itself, this should be an interesting one.

Former Barcelona president Bartomeu arrested after club offices raided 13:01
Echoes of Berlin 1936 . . . Should Beijing Winter Olympics be boycotted? 10:01
The Offload: Ireland women must be allowed to move with the times 10:00
Tiger Woods touched by red and black tribute by fellow players 08:52
England prop receives death threats for not clapping Wales off the pitch 08:29
Crossword Get access to over 6,000 interactive crosswords