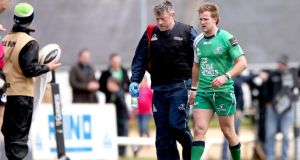 Connacht will travel to play Gloucester in their Champions Cup play-off without the injured Kieran Marmion. Photograph: Inpho

Connacht’s pursuit of a Champions Cup spot for next season continues on Sunday as they travel to Kingsholm to play Gloucester in a European play-off.

Pat Lam has made two changes from the side which were beaten by Ospreys at the Sportsground last weekend with George Naoupu replacing Aly Muldowney at lock and John Cooney starting at scrumhalf.

Cooney was named in the emerging Ireland squad this week and he comes into the starting line-up in place of Kieran Marmion who has been ruled out for four weeks after suffering medial ligament damage in his ankle.

Rodney Ah You is set to make his 100th appearance for the province as they return to the scene of April’s 14-7 Challenge Cup quarter-final defeat.

Lam said: “”At this stage of the season, our small squad is pretty badly hit with injuries and that list of unavailable players has grown even further now with Kieran (Marmion) out for us as well.

“We’re going up against a quality Gloucester side stacked with international players and their top XV coming off the back of a week’s rest. There’s no doubt they have the advantage playing in their home ground so we know we will have to be at our very best as a team.

“Our season goal was to finish in the top 6 so we could qualify automatically for Champions Cup rugby next season. While seventh is a record finish for Connacht rugby in the PRO12, we still have this opportunity to secure that final place so there’s huge motivation.”