‘If I didn’t like the Queen ... I wouldn’t have travelled’

On meeting Queen Elizabeth: A trip north ends up with O’Gara being accused of disrespecting the monarch 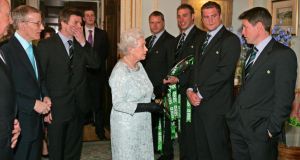 The Ireland squad had been invited to an official congratulations ceremony with Her Majesty in recognition of the Grand Slam. I wouldn’t have much knowledge about the royal family, though I admired Princess Diana.

I met Prince William on Lions tours and after we beat Wales in Cardiff. He was approachable and friendly in the changing-rooms, and himself and Jessica got on well when they chatted. He told her that he hadn’t understood a word I’d said.

I’ve sometimes been slagged by Munster and Irish mates that I look a little like him too. I’d also enjoyed a good ‘session’ in a group including Mike Tindall and Zara Phillips after an Ireland-England game in Dublin when we slipped out the side door of the Shelbourne and were driven to Krystle nightclub.

That was the extent of my knowledge of the royal family.

It was optional for players to attend the reception but as a senior player I felt I should do so. This involved a flight from Cork and a train, so it was a big commitment. If I didn’t like the Queen, or if I’d strong feelings about the monarchy, I wouldn’t have travelled to Belfast.

Private function
We were in a private function for two and a half hours. We drank tea out of china, chatted with various people, and the atmosphere was very relaxed. We were advised about the protocol when meeting the Queen – how you stand and what you do.

I can still picture the moments before meeting her. I had sweaty palms. I like to think I present myself well, so I put them in my pockets to keep them dry. That’s also a habit of mine.

I was next in line to be introduced when an opportunistic photograph was taken a moment before I took my hands out of my pockets to greet her. If there is one thing I’d most like to clarify from my playing career, it is this incident. You don’t disrespect the Queen, and the way this image was presented to the world was appalling.

I was portrayed as a difficult Corkman. I received supportive letters, from rabid republicans! I am a very proud Irishman and a Catholic but I am not a republican. I don’t have any strong political feelings either way; I am not politically aligned.

Ninety per cent of the Ulster team are Protestant and many of them are my friends. But irrespective of how strongly you feel, be it the Queen or the Pope or anyone in a powerful position, and especially a lady, I don’t believe you should be rude or treat them discourteously.

Amazing photo
It is an amazing photo. Brian’s face suggests something is happening. It couldn’t have been staged any better. We’d been informed that it was a private function, in which case the photo was a breach of confidence.

There were a few things that didn’t add up. Some people are so stupid for thinking it was a statement, that I was trying to insult the Queen.

The fallout was disturbing, and I’m glad to have an opportunity to explain what truly happened. It bothered me, and I wouldn’t be bothered by much. I’m thick-skinned, but I’d like to think as time has passed people would appreciate that I am respectful. Critics can slate the arse off me all they want, but this was about manners and respect.

This reflected on my upbringing, my parents, stuff that means something to me. I was described in the Irish Independent as a lout; Kevin Myers said it was “loutish behaviour”.

I understand it was largely my own fault, but it was never my intention to offend anyone. I wish I had taken my hands out of my pockets sooner. I was in a relaxed environment and I was looking forward to meeting the Queen, but it turned into a bit of a horror show.