Ian Madigan: ‘Reality is there are steroids out there that are perfectly legal’ 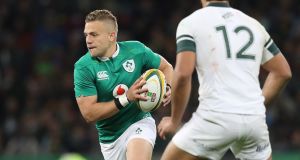 Ireland international Ian Madigan, speaking in an interview with The Irish Times, has described the use of anti-inflammatories as normal part of a professional rugby players life.

“It is a hugely physical contact sport,” said Madigan. “You are going to need help at certain parts of the season. I don’t know enough about what they took but I can only imagine it was some sort of anti-inflammatory cream or an oral anti-inflammatory that was very strong.

“When you hear the world steroids you think, ‘Aw, they’re cheating’ but the reality is there are steroids out there that are perfectly legal. Like, they are not performance enhancing in the sense that they are making you stronger or anything like that. They are merely masking an injury. They are a very short term solution to problem you have at a given time.

“When you are playing professional sport there is massive pressure every week to not only perform but get out on the field,” the 27-year-old said ahead of Ulster’s visit to Bordeaux on Sunday. “That comes from other players on your team and from your coaches. You will do whatever it takes, within the rules of course, to get yourself on the field and put yourself in a position to do what’s best for the team.

“I don’t really know the ins and outs of the TUE but they are there for a reason and really shouldn’t be abused.”

RTÉ reported this week that in 2015, 43 TUEs (Therapeutic Use Exemptions) were granted from 75 requests across all sports in Ireland. In total 12 of these were for rugby players.

“Look, I’m sure Racing will get to the bottom of it,” Madigan said.

“For someone like Carter who has been in the game for so long I would be absolutely shocked if any wrong doing was done on his part or Imhoff or Rokocoko.

“The sooner it is made all clear the better for them and the better it is for the game. When I heard it straight away I was very sceptical of the fact they could have been cheating.

“They would be conscious of not just hammering your system with medication and the detrimental effect that could have on you further down the years.

“Off the back of that knowledge I have brought that over here and they are similarly stringent here. They are not just dishing out the medication willy nilly. You only get it if you really need it.”

Madigan, the full interview is in Saturday’s Irish Times, also noted differences between being a professional rugby player in Ireland and Bordeaux.

“There are parts of it when you look at it and say they are not as professional as what I was used to back at home. Like lifting weights would be a good example of that. They look at a player who has come in from England or Ireland lifting big weights – they don’t look at you and go I want to get to that level myself. They just look at you and go: good for you but that’s not really how we do things here.

“They are very professional in other areas. I think they are ahead of us over here with recovery than we are back home. They do cryotherapy two, three times a week. Everyone does the ice baths after training.

Obligatory stretching six, seven times a week. Off the back of it there is probably less muscle tears over here. I don’t know if that’s down to genetics but they would be more focused on that.

“They are churning out naturally much bigger people. We’ve got to make up for it by being particularly strong. We have done a great job turning that around in the last ten years. We have probably passed them out in strength but that doesn’t always transfer across in games.”