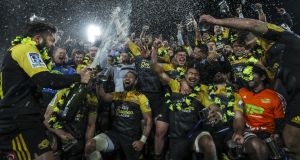 The Hurricanes celebrate after winning the 2016 Super Rugby Final match between the Hurricanes and the Lions at Westpac Stadium. Photo: Simon Watts/Getty Images

Outhalf Beauden Barrett dived on a loose ball with a little over 11 minutes remaining to score a try that sealed the Wellington Hurricanes’ first Super Rugby title with a 20-3 victory over South Africa’s Lions on Saturday.

Barrett pounced after confusion by the Lions inside their own 22-metre area to give his side a 17-point advantage, while he added 10 points from the boot in terrible weather conditions.

Hurricanes winger Cory Jane also scored a try in the first half as the home side’s impressive defensive line speed ensured they sealed the title in front of a delirious sell-out crowd of 34,973.

Elton Jantjies kicked the visitors’ only points with a first-half penalty as the Lions struggled against the yellow-and-black wall of defenders.

Both sides had endured more than 20 years of pain prior to reaching Saturday’s final.

The Lions had perennially been South Africa’s worst side in the competition and were even relegated from Super Rugby in 2013 before rebuilding through the domestic Currie Cup.

The Hurricanes had romped through last year’s competition and were heavy favourites to clinch their first title only to fall apart in the final against the Otago Highlanders.

This year’s team, with only six players who started last year’s final starting on Saturday, however were not going to let lightning strike twice.

The Hurricanes line speed on defence, which has been clinical since the competition resumed following the June international break, was in the face of the Lions’ playmakers, with Jantjies constantly harried.

The 26-year-old was restricted to shovelling the ball to runners outside him and kicking for territory to try to put the Hurricanes under pressure.

The home side managed to take a 10-3 lead into the break, courtesy of a Barrett penalty and a converted try to Jane that came about through their relentless defence inside the Lions territory when centre Lionel Mapoe kicked the ball straight back to the winger.

Jane had crossed for an earlier try following a cross-kick from Barrett, only for television official Ben Skeen to rule it out for a knock on in the buildup.

Barrett added his second penalty after halftime to extend the lead to 13-3 before he pounced when the Lions failed to clear the ball from a defensive lineout to seal the win.