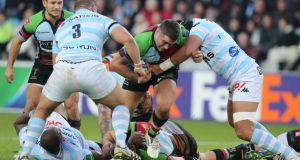 Racing Metro 8 Harlequins 32: Nick Evans scored 17 points as Harlequins produced one of their finest performances in Europe to win 32-8 and give themselves a lifeline in the Heineken Cup.

The outhalf scored the first of his team’s four tries as Quins stunned Racing Metro in Nantes to claim their first win of the campaign.

Nick Easter, Charlie Walker and Karl Dickson then all followed to secure a bonus-point victory at Stade de la Beaujoire that lifts them to second in Pool Four.

Danny Care went close in the opening minutes amid a lively start by Harlequins.

But it was fellow half-back Evans who finally broke the deadlock on 18 minutes with the game’s opening points.

Quins’ forwards edged forward with a series of drives before Evans spotted a gap. The outhalf ran between Francois van der Merwe and Wenceslas Lauret before rounding full-back Juan Martin Hernandez to touch down.

Evans converted his own try and then added a penalty five minutes later for an early 10-0 lead.

Matt Hopper was then denied Harlequins’ second try when the video official ruled he put his foot in touch before grounding the ball under pressure from Marc Andreu.

Just two minutes later and Easter made sure with Quins’ second try of the contest.

Mike Brown launched an attack from halfway, although the move looked to have come to a halt when he slipped on the greasy turf.

However Care released Easter and the number eight barged off fly-half Benjamin Dambielle and was unstoppable from five metres out. Evans’ conversion handed Harlequins a 17-0 lead after half an hour.

Racing finally awoke from their slumber and briefly threatened, although they struggled to break down a resilient Quins defence.

Even when Evans saw a kick charged down, Walker scrambled back to clear the danger.

The home side settled for a penalty on the stroke of half-time but then rung the changes — including the arrival at half-time of Johnny Sexton but not even the former Leinster man’s arrival could turn his team’s fortunes.

But it was Evans who claimed the first points of the second half as Quins continued where they left off in the first half.

Hernandez fumbled Care’s speculative kick and Walker was on hand to take advantage. The wing gathered possession and handed off Maxime Machenaud before outpacing the covering defenders into the corner.

Sexton came close to finding a way back for Racing but his crossfield kick, following a series of drives by his forwards, eluded the fingertips of Juan Imhoff out wide.

The out-of-sorts Parisiens found a way back when Karim Ghezal’s lineout take set up a drive from which Bernard Le Roux was driven over, although Sexton pushed his conversion across the posts.

Harlequins ensured they had the final say and wrapped up a vital bonus point on the road when replacement scrum-half Dickson completed a powerful drive by his forwards for the final score 10 minutes from time.