Gonzaga come out on top after tense battle with Wesley 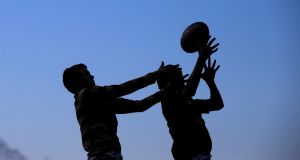 Playing on the impressive all-weather surface in Clontarf RFC, Wesley broke the deadlock on the stroke of 10 minutes, as pacey winger Tim Spencer raced under the posts after he intercepted an attempted pass from Gonzaga’s Oran James.

This try was supplemented by a Bill Corrigan conversion, but following excellent approach work by James and Micheal O’Kennedy, outside centre Harry Brennan crossed over on the left-flank for a converted touchdown.

As a result, the sides were on level terms (7-7) at the mid-way point in the action, but thanks to a successful Adam Curry penalty, Wesley regained the lead on 49 minutes.

However, at the end of a lengthy attacking move inside the opposition ‘22’, substitute hooker McEvoy crossed over on the hour mark. James subsequently added the bonuses to this five-pointer in spectacular style, and although Wesley stayed within touching distance, Gonzaga’s victory was finally secured courtesy of an O’Grady try deep into second-half stoppage-time.

1 Gerry Thornley: Wild reactions to this Ireland team as fickle as the wind
2 Caelan Doris and Ronan Kelleher make strong case to start against Italy
3 England and Eddie Jones at the vanguard of rugby’s hybrid era
4 Mayo GAA cut contact with Tim O’Leary after ‘Horan Out’ tweet
5 Dan Tuohy explains ‘rotten to the core’ comments
Real news has value SUBSCRIBE