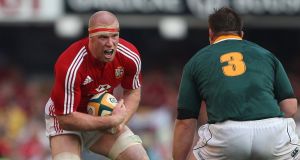 Paul O’Connell, having given his all as Lions captain in 2009, looked like he took about a year to recover. He was far from alone. Photograph: Billy Stickland/Inpho

There’ll be plenty more where they came from between now and the summer of 2017 in New Zealand.

The 2016 Six Nations will be conducted to the backdrop of the identity of the next Lions’ head coach who, ironically, will assuredly be one of the Kiwis currently coaching the Celts, be it Warren Gatland, Joe Schmidt or, at a push, Vern Cotter.

With great fanfare, he will be confirmed sometime soon after the championship and then, rather grandiosely, will be obliged to abstain from his duties with his international team so as to focus on the Lions for the 2016-17 season.

With the said head coach watching on, the 2016 November internationals and 2017 Six Nations will then be conducted as a glorified sequence of final trials for places in the playing squad.

In the interim, all manner of ‘official’ commercial partners and appointments will be announced by the British & Irish Lions.

Time was, at the outset of professionalism and with the advent of the World Cup, when devotees of the Lions concept feared for its future on the basis it would become an anachronism. They were valid fears. Exhausting Lions tours at the end of domestic seasons halfway through World Cup cycles are indeed a tad anachronistic. The bottom line is they are just too demanding.

But they’ve been revamped to fit into the four-yearly schedules, albeit like a square peg in a round hole, and more than anything, they’ve made money. Lots of it. And there’s about to be even more where that came from too.

In order to cover the cost of almost €20 million for the tour to Australia, the Lions arranged a stopover en route to Australia in Hong Kong and a game against the Barbarians which raised the Lions an estimated €15 million.

Negotiations are ongoing to ensure a more equitable share for the Lions, and with it an increased dividend for the four Home Unions. So, not only would it be sacrilegious to suggest scrapping the Lions, it will soon also fly in the face of commercial sense more than ever.

Yet, following on from none of the four teams making even the semi-finals for the first time ever, if the Home Unions really wanted to improve their chances at World Cups, arguably the best single thing they could do is scrap the Lions.

Purely from a rugby perspective, it’s impossible to imagine the New Zealand, Australian and South African unions agreeing to a composite tour of Britain & Ireland. They would find that demeaning; selling themselves short individually.

They’re also all quite capable of completing Grand Slams tours on their own devices thank you very much, and to prove the point, frequently do just that.

By contrast, when the best of the Home Unions are whitewashed comprehensively, as happened on the disastrous tour to New Zealand in 2005, the psychological damage to the game in the England, Wales, Scotland and Ireland is almost as significant as the physical.

The Tri Nations love the Lions too, for they are ideal tourists. Four years ago, it’s reckoned that 40,000-plus British and Irish fans flooded into Australia to support the Lions.

Most of all though, with World Cups in mind, the toll on the Irish and British players (whose love of the Lions concept has been revitalised by Sky’s warts-and -all documentaries) is ridiculously exacting, and the demands of the club game has meant no allowance has been made for this.

The ten-match tour in 2017 is even tougher than in 2005, taking in games against the Super rugby franchises as opposed to the provinces for the first time. It begins on June 3rd against a Provincial Union XV in Whangerei, and concludes on July 8th with the third Test in Eden Park. The competitive 2017-18 season will be just eight weeks away.

The final of the Premiership in Twickenham is the previous Saturday, May 28th, before that tour opener and ditto the Pro12 final in Murrayfield. Rather laughably, that weekend marks the penultimate round of regular season matches in the Top 14, with its final fully four weeks later on June 24th.

Once again, there will be scant chance to prepare properly with the entire squad. Best of luck then to Wazza or Joe and the boys on that one.

Not alone did that 2005 tour leave Brian O’Driscoll in need of shoulder reconstruction, but it pretty much finished off the last vestiges of England’s golden generation.

Paul O’Connell, having given his all as Lions captain in 2009, looked like he took about a year to recover. He was far from alone.

Square pegs in round holes. Wanna win a World Cup? Scrap the Lions. No chance. But just an idea.

2 Messi’s red-card outburst the act of a desperate, hopeless man

David Alaba reaches agreement to join Real Madrid on free transfer 07:33
Arsenal back in the top half; Maybe it’s time for AIL top tier to go semi-pro? 06:55
Different Strokes: Lee Westwood knows recovery is key 06:30
French Light can provide landmark winner for Keri Brion 06:00
Waiting Patiently to drop back in trip at Ascot 06:00
Crossword Get access to over 6,000 interactive crosswords