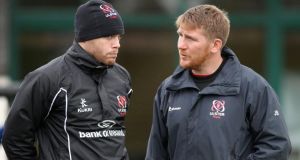 Former Waratahs defence coach Joe Barakat will join Ulster on a two-year deal as an assistant coach this summer, with the province also confirming that their present defence coach Jonny Bell will be leaving at the end of the season to join Gloucester.

Barakat, 51, spent five years with the New South Wales franchise between 2006 and 2010 where he was also academy head coach.

A former Head of PE at St Patrick’s College, Strathfield, he coached Australia under-21s and has been employed as a technical consultant to the Fijian Rugby Union.

For the past five seasons he has worked in Japan, first as forwards and defence Coach at NTT Communications Shining Arcs, before joining Toshiba Brave Lupus as forwards, attack and defence coach.

“This is a great opportunity for me to join a top European organisation and I am really excited to have the chance to work with and help improve such a strong panel of players at Ulster,” said Barakat.

“Ulster’s reputation as a province is renowned throughout the world of rugby, as is the passion of the supporters. Along with Neil Doak, Allen Clarke and the rest of the management team, I am committed to helping to deliver on our ambitions for success in the Guinness PRO12 and Europe.”

Former Ireland centre Bell leaves Ulster after more than 20 years. He made 81 appearances for the province as a player and worked in the Academy before coaching the senior team.

“Jonny has been a tremendous servant for Ulster Rugby as both a player and a coach,” said Ulster manager Bryn Cunningham, who was a former team-mate of Bell. “We wish him every success in his new role and we know that in his remaining months with the province that he will be working hard to help the team be as competitive as possible in the Pro12.

“When Jonny told us in October that he would be leaving to explore his options and expand his coaching experience, we set out to recruit a coach that would both complement the expertise that we already have, as well as providing a fresh insight and perspective into the game.

“We are therefore hugely excited that Joe is joining Ulster and we know that his experience of club, provincial and international rugby will be invaluable to us throughout our rugby programme in our quest to be a top side in both Europe and the Pro12 in the coming seasons.”

Ireland assistant coach Les Kiss will take over the role as Director of Rugby at Ulster at the end of the World Cup.