Munster and Ireland international Anthony Foley died suddenly in Paris at the age of 42. Images: The Irish Times/ Inpho 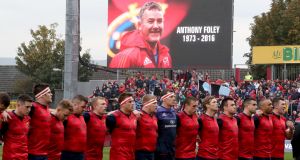 Anthony “Axel” Foley was honored with both song and silence at Thomond Park as Munster took on Glasgow Warriors in their first game since the sudden death of their head coach last week.

Munster won the game 38-17 but the moment supporters will remember most from the day came after the final whistle blew.

Foley’s sons Tony and Dan were brought out onto the centre of the pitch and into the arms of the Munster rugby family - a circle of players who led a powerful rendition of Stand Up and Fight.

The two boys wept as the crowd sang the team’s battle anthem.

“I’ve never seen anything like it. It was an incredible display by Munster. It felt like the old days when we were the kings of Europe,” said supporter Brian McGee, from Cork.

A minute’s silence is being observed at all European rugby fixtures this weekend following Foley’s sudden death in Paris last week.

Munster Rugby retired its number eight jersey for Saturday’s game out of respect to the former player and head coach.

Young players and students from Shannon RFC and Foley’s former school of St Munchin’s formed a guard of honour as the teams took the field. And in a sea of red, with flags and banners aloft, the Munster battle anthem Stand Up and Fight rang out.

Earlier, fans queued to sign books of condolences and continued to leave momentos at a massive shrine of jerseys, scarfs and hats to Foley.

Munster season ticket holder Brian McCarthy, who travelled from Fermoy said: “Foley was the man I always came here to see. He wasn’t athletic but he knew where to be and when to be there. I’m the same age as him. I think I played against him once under-14 when he was at St Munchins.”

Diarmuid O’Neill and his grandson Alfie signed a book of condolences, describing Foley as a man who “gave us so much joy”.

“He was years before his time. It’s so sad for this wife and family. We are here to wish Anthony all the best,” Mr O’Neill said.

Brian Flanagan (39), from Prospect, Limerick, said: “It’s just heartbreaking, but we will pay a fitting fair well to Axel today.”

His son Jordan (17) added: “I got chills when I saw the reception he got here at Thomond Park when they brought his coffin past. He was one of the world’s best number eights ever.”

Carmel Tierney, from Kilnaboy, Co Clare also signed the book of condolences. “He meant everything to us. He was honest and he gave Munster everything. He epitomised what Munster rugby is all about,” she said.

“This is probably the biggest day in the club’s history,” said Conor.

“It’s a hugely poignant day and the match is secondary,” his father said. “Anthony Foley was an absolute inspiration both on and off the field; as a human being, as a sports man. He was Munster through and through to his DNA.”

Inside the stadium the Munster rugby choir has whipped up the home crowd with rousing renditions of rugby anthems The Fields of Athenry and There is An Isle to standing ovations.

In a statement, Munster Rugby said: “In symbolising both the heart and commitment with which he played and coached, and the immovable place he holds in the hearts of all those associated with Munster and the wider community, our jersey will carry the name ‘Axel’ under the Munster crest in each European game this season.

“Fittingly, ten years on, this season’s European jersey is a throwback to the 2005/06 jersey where Munster, under the stewardship of Axel, met their European destiny...

“May 20th 2006, his ambitions were realised and, as someone who had given his all, and some, to the cause, it was only right that Anthony was the one who lifted the trophy when Munster won their first European Cup in Cardiff’s Millennium Stadium.”