Fitzgerald fit to start for Leinster 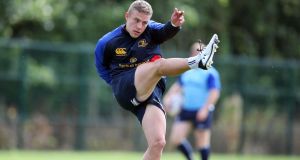 Leinster coach Matt O’Connor has named Luke Fitzgerald on the left wing for the Irish province’s RaboDirect Pro12 game against the Ospreys at the RDS tomorrow night (6.15).

Fitzgerald has recovered from the groin strain that forced him off against the Scarlets last weekend. Fergus McFadden’s hamstring problem continues to keep him sidelined so Brendan Macken continues his centre partnership with Gordon D’Arcy.

Jimmy Gopperth, who scored 22 points in a match of the match performance against the Scarlets, retains the number 10 jersey. Ian Madigan is named in the match squad but he starts on the bench. The backline is unchanged.

Shane Jennings again leads the team and the pack is bolstered by the return of Irish interenationals Kevin McLaughlin and hooker Richardt Strauss. Mike McCarthy will make his home debut after appearing as a replacement in Llanelli, while there is also a first start this season for Mike Ross who also featured off the bench.