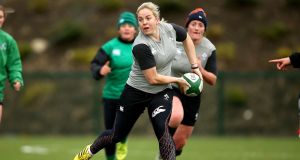 Niamh Briggs: will captain Ireland against England at the Stoop. Photograph: Dan Sheridan/Inpho

This first November international could become a historic one should Niamh Briggs’s Ireland figure a way to win a Test match on English soil for the first time in their history.

To be honest that’s highly unlikely seeing that England’s World Cup-winning forwards like Marlie Packer and Rochelle Clarke will be on deck this afternoon. They are also seeking to atone for last week’s 11-0 defeat to France at The Stoop, their official new home.

But this can all be viewed in a positive light. Crossover Sevens players will understandably focus on that game now that Ireland have qualified for the World Series so Tierney has been scouring the club and interpro scenes in search of fresh talent to build depth ahead of the Six Nations (which clashes with two Sevens tournaments) and 2017 World Cup.

That includes Lindsay Peat. An accomplished Dublin footballer and basketballer, her rapid promotion to the Ireland squad, albeit helped by injury to others, makes her possible introduction off the bench an intriguing prospect.

Same goes for the sight of Sophie Spence in the backrow. Nominated for world player of the year as a lock, Spence provides cover for the injured Claire Molloy.

“We are part of the (IRFU) high performance now,” said Briggs. “The camps of late have been a step up in our preparation. We have met at least once a month. The S and C and skills have gone up another level as well.

“It’s great to see; it’s what we wanted to see for years. Before this it was three or four weekends in January before the Six Nations. Now it’s constant, we are in touch all the time.”