Would the provinces dominate a dream XV from 20 years of Europe?

Leinster, Munster and Ulster have left an indelible mark on a tournament approaching it’s 20th final 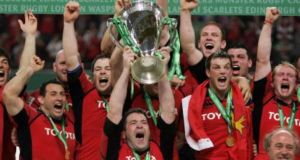 Time-travelling is always a temptation at this time of year. This week sees the 20th showpiece final in European club rugby’s eventful history and, inevitably, there will be those pining for the good old days when Munster, Leinster, Wasps, Leicester or Toulouse were the continent’s undisputed kings. Even if Toulon become the first side to win three successive titles, not everyone will hail them as the best of all time.

So, as a Twickenham aperitif, let’s try and broaden that argument by choosing the best XV to have graced the tournament in the past 20 seasons. The criteria are simple: an individual must have made a significant tournament impact and featured in at least one European Cup final. Already that excludes some fine Test Lions – Jason Robinson, Stephen Jones, Jamie Roberts, Alun Wyn Jones – but rules is rules.

Some positions are almost impossible to sift. How can you reject such distinguished modern fly-halves as Jones, Ronan O’Gara, Jonny Wilkinson, Felipe Contepomi, David Humphreys, Alex King and Diego Domínguez without feeling genuine pangs of guilt. At No8, too – before people storm the Guardian offices en masse – it is only fair to mention that Lawrence Dallaglio, Pat Lam, Jamie Heaslip, Imanol Harinordoquy and Shaun Sowerby, among others, were seriously unlucky.

In the end, though, desperately hard decisions could be swerved no longer. Not only did Anthony Foley captain Munster to their famous first Heineken triumph in Cardiff but no forward in the history of the tournament has scored more than his 23 tries. Wilkinson may have featured in two winning European finals but Jonny Sexton managed three in four years with Leinster.

Looking down the final list, the Irish provinces are decently represented, which is hardly a surprise given Munster and Leinster’s history in the old Heineken Cup. You could hardly leave out Brian O’Driscoll or Paul O’Connell, could you? At least O’Gara makes the bench, which is something. His tally of 1,365 points in the tournament is so far out in front it may never be beaten.

The contentious calls? Given the quality of modern back-row forwards, never mind over the past two decades, not everyone will concur with the choices of Rocky Elsom and David Wallace on the flanks. The nay-sayers are forgetting how absurdly dominant Elsom was during Leinster’s title-winning campaign of 2008-09 and underestimate Wallace’s achievement, along with O’Gara and John Hayes, in playing in four Heineken finals. Even Neil Back, Thierry Dusautoir, Sean O’Brien, Steffon Armitage, Julien Bonnaire, Juan Smith and Brive’s fine Polish international Gregory Kacala cannot claim that.

Not many, either, have won European Cups playing in two different positions for two different clubs, as Philippe Carbonneau did. As the scrum-half kingpin for the great Brive side who smashed Leicester in 1997 he was irresistible, having been picked at outside-centre for Toulouse the previous year. Austin Healey, who reserved some of his best rugby for Europe, deserves a mention in this category while Ulster’s high-class Ruan Pienaar is another Rolls-Royce utility player.

It is even more awkward to survey a team-sheet lacking finishers of the calibre of Emile Ntamack, Ieuan Evans and Cédric Heymans (six times a finalist – a record), never mind Napolioni Nalaga, Tommy Bowe and the prolific Chris Ashton. In the end, though, there has to be a place on the left wing for Vincent Clerc, the tournament’s all-time highest try-scorer, and even Nalaga never created quite as much panic in opposition ranks as the former All Black Sitiveni Sivivatu during Clermont’s run to the 2013 final.

For all the qualities of Clément Poitrenaud, Isa Nacewa and Nicolas Brusque, too, Geordan Murphy’s all-round footballing skills just earn him a jersey, with the outstanding Matt Giteau completing the backline. Up front Trevor Leota may not have been the world’s slimmest hooker, but as a wrecking ball he was monumental. Put Joe Schmidt in charge of strategy and this bunch would take an awful lot of beating.