Ulster hope to reach new highs in the Alps against Oyonnax 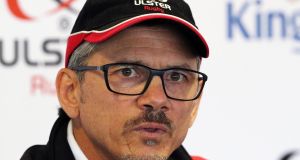 Ulster are much closer to home but a trip to the mountains in the Ain department of the Rhone-Alpes and Stade Charles Mathon to play against a team eager to prove their worth in the first season in premier European competition provides its own trip wires.

The region is a centre for the plastic industry and is known in France as Plastic Valley. Maybe that’s where their 3G pitch comes in but playing on that quicker surface is an adjustment Ulster are going to have to make quickly or perish.

While the province have access to a 3G pitch at Ravenhill, they don’to play matches on it.

“Yeah we had a session yesterday on it,” says Ulster coach Les Kiss. “Today we didn’t but the kickers did a session on it today. We’ve used it judiciously throughout the year but it’s nice to have that option for sure. They play at home on a 3G then go away and play on grass . . . they are very comfortable at home on that surface.

“It becomes a quicker game. You can see when they play on it, their speed men and even some of their power men gain purchase on the ground quickly and they get their momentum quickly and there are some big powerful boys on that team.”

Oyonnax have played in the Challenge Cup for the last two years with wins over Sale Sharks, Biarritz, Brive and Zebre. But since their promotion to the French Top 14 in 2013, they have pushed on, have had two league wins this season as well as been hammered by La Rochelle last week (38-3). They produced one of the stunning wins of the year when they beat Clermont Auvergne in Stade Marcel Michelin in April.

It’s a mix of things about which Ulster are wary, not least of all the festival atmosphere which will greet them from the stands. It is a town with a population no greater than 30,000.

With Toulouse and Saracens awaiting Ulster in the other pool games, Kiss knows it’s a must-win match.

“It scares me in a way,” he says. “The reason I guess is they did exceptionally well to get into Europe last year and the way they did that is by being exceptional at home.

“So we’re on a 3G pitch up in the mountains and they’ll be hungry. They will love nothing better than saying that their first tilt in Europe ended in a victory. That’s what scares me. . .

The best Ulster can hope for is that Saracens and Toulouse negate each other, they can beat Oyonnax and then win their home games in Belfast. There’s a lot of ifs and buts as well as some luck. .

At least for this tricky assignment, Kiss also has the fortune of being able to include Andrew Trimble, Nick Williams, Louis Ludick and Luke Marshall.

He’s only been in the job a little over two weeks and admits that he’s slowly patching his own thoughts into those Neil Doak had already instilled. In that sense it’s a softly, softly approach from Kiss.

“What I’ve tried to do is integrate as far as possible with what’s been done so far,” he explains. “It’s me getting in and shifting things a little the way I like to see them.

“But only two weeks in I accept what it is and I will continue to make adaption whenever necessary but we are happy where we are at this stage,” he concluded.