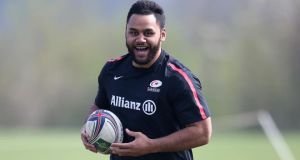 Toulouse prop Census Johnston has been ruled out of the Heineken Cup quarter-final against Munster at Thomond Park (1.30pm) on Saturday.

The Samoan sustained a neck injury in the 32-28 defeat to Toulon on Saturday and was stretchered off the pitch.

Coach guy Noves will give Louis Picamoles (hip), Luke McAlister (back) and Yannick Nyanga (ankle) every chance to prove their fitness.

Saracens number eight Billy Vunipola could face Ulster on Saturday, in their quarter-final at Ravenhill (6.30pm).

Vunipola has not played since picking up an ankle injury while playing for England against Ireland in the Six Nations in February, but he may be ready for an earlier than anticipated return.

“We’ll make a decision later in the week,” Saracens boss Mark McCall said. “If Billy plays it’ll be because he’s fit to play. We won’t take a risk with any player.”

Toulon’s Martin Castrogiovanni could also return from injury against Leinster at the Stade Felix Mayol on Sunday (4.30pm).