Tiernan O’Halloran: We clawed back but it just didn’t happen 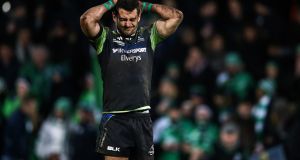 A dejected Tiernan O’Halloran after the game in Toulouse. Photograph: Tommy Dickson/INPHO

Disappointment and regret was etched across the face of Tiernan O’Halloran as the Connacht full-back reflected ruefully on perhaps the biggest one that has ever got away from the western province in his time playing for them.

“We knew the task ahead of us coming over here, and our focus was to just win the game. There was no other mentality towards it and that first 10 minutes really hurt us. We didn’t match up physically from our kick-off and they went the whole length of the pitch.

“Mentally, that’s tough in the first five minutes and they get a try that quickly. That’s the good thing about the lads here. Everybody fronted up and we clawed back and got to the last play of the game there with a chance still to qualify and we just couldn’t get over the line.”

What made it all harder to take was that after an error-strewn and seemingly nervous first-half, and then falling 19-3 behind, Connacht had so much momentum with them entering the last 15 minutes, as well as the field position to nail the score, any score, to qualify.

“It did and we were playing some good rugby on turnover ball and disrupting their lineout ball and things like that. You could see that there was a confidence among the lads. We were down in their 22 and unfortunately we came away with nothing. We didn’t capitalise from all that possession, so that’s another swing in momentum. Look, we got the ball the last play of the game again and we didn’t capitalise again. That’s just the way it turned out.”

They were also all fully cognisant of the fact that a drop goal or a penalty would have sufficed, provided they didn’t let Toulouse score again.

“We knew that. A few of the key guys sat down with Pat last night and knew the situation and what could happen in the last five minutes. The big thing was not letting them score another try, because if they did, we were in big trouble. The first focus was on our defensive mentality to keep them out, but the other thing was to try and get our opportunity for three points.”

“It didn’t happen for us that time in their 22, but I don’t think we panicked. Even if we’d got the three points, we would have had to exit again and they might have got another opportunity. That’s just the way it was but there was never a case where we didn’t know what was happening. We were in control of what the situation was, we just didn’t execute it.”

O’Halloran admitted it was hard to analyse Connacht’s best European Champions Cup campaign ever in its immediate aftermath.

“It’s tough straight after the game. It’s massively disappointing. But Mul spoke there about taking the positives from it. It’s the first time we came near qualifying for the knockout stages, and after qualifying in the first place ourselves and not having someone like Leinster doing us a favour, it’s something we take a bit of pride in.

“It’s also a benchmark now. We’ve set a mark and that’s where we need to be year in year out. We’re in a tough position in the league and it’s back to that for us now. What’s done is done here.

“We will take a lot from those wins against Toulouse and Wasps and we need to up our league form now and hopefully during the Six Nations period we can capitalise on that and hopefully start crawling up the table again.”

Having gone toe-to-toe with Toulouse twice, O’Halloran clearly believes Munster have every chance of reaching the semi-finals, albeit that Toulouse’s power game is dangerous.

“The way Munster are playing, they can beat anybody. Against Toulouse it’s just such a physical battle. It was the same in the first game back in the Sportsgound. It was so physical, they are massive lads and it is often a case of two of our lads tackling one of them. You saw that the first-half as well. They just rumbled through us a few times and it is very hard to stop them when they get momentum.

“But then you could see there at the end that they tired a small bit. But we couldn’t capitalise at crucial times when we maybe had an overlap, or should have switched back in play. They have got internationals all over the pitch and they are massively physical, but Munster are well able to take anyone the way they are going.”