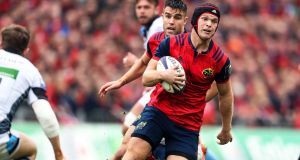 Tyler Bleyendaal on his way to scoring a Munster try against Glasgow Warriors. Photograph: Tommy Dickson/Inpho

“We would never say we want to win for Axel,” said Munster’s director of rugby Rassie Erasmus afterwards.

“We actually tried our best not to even think that way, because you just think that for a hero and a legend and friend and a father and a buddy and a soulmate, and everything that he was for different people, to put your neck out there and say we’re going to win for you, you can’t put something that’s so important for somebody who has passed away, to say something stupid like that.”

“So we wanted to play the way he coached us, and we didn’t do that for the last few weeks. I think that was not the theme, but the actual reality for the guys, and the belief of the guys. That helped a lot, that the guys really believed that, because we unpacked that during the week and said: ‘Let’s unpack this. Even if we don’t get the result, but how did he want us to get this right? Why didn’t we get it right?’ And I think that kept us focused.”

Asked how proud he felt, Erasmus said: “It’s not so much being proud about the performance or the result, although I am really proud of them both. But we spoke about the detail on what Axel wanted us to get right, the passion Axel had for Munster and the way that he did things.

“And maybe sometimes we didn’t understand how he did things. I’m so glad that came through. It would have been terrible had I sat here after we lost or something like that. And that’s a big thing.”

“But it’s almost understandable in a way. Because it is tough to control your emotions, you could see the way we scrummed and mauled, that there was a lot of emotion in there along with the technique. And then Keith was really up there emotionally.

“He spoke at half-time, what he told the guys at half-time was that we were in the game and we can still win it the way we want to do things. He’s obviously now a bit sad about that but with us getting the win and him helping us through the game, with his input and technical knowledge, he was still part of it up until the end.

Seán Moran: What nostalgia tells us about how the GAA sees itself 06:20
Six Nations rugby needs to be protected for terrestrial TV 06:00
My favourite sporting moment: Game, set and couch as Borg takes down McEnroe 06:00
Dr Claire Molloy: ‘It is a privileged place to be, on the frontline’ 06:21
Garry Ringrose to stay with Leinster as he signs two-year central contract 06:23
Here is your handy guide to sport on television this week