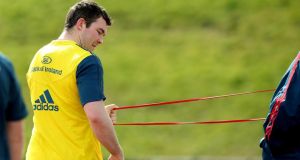 Peter O’Mahony: “He trained well today but not fully. Hopefully by the end of the week he’ll be right.”

The 24-year-old’s hamstring, initially damaged at Twickenham on February 22nd and exacerbated as Ireland captured the Six Nations title at the Stade de France on March 15th, still has a chance of recovering but Donnacha Ryan is almost certainly out of contention.

“Peter O’Mahony is on a managed work load at the start of the week,” said Munster coach Rob Penney this afterrnoon. “Hopefully he will have no repercussion tomorrow. He trained well today but not fully. Hopefully by the end of the week he’ll be right.

“Donnacha Ryan is probably very unlikely but we will make a decision on that later in the week. Again, he is on rehab action plan. It will either be right or it won’t. That will become clear over the next couple of days.”

A coach stating “probably very unlikely” is as clear as can be.

The public was only informed of O’Mahony’s non-involvement at the sold out Aviva stadium, for Saturday’s 22-18 defeat to Leinster, a few minutes before kick-off. CJ Stander started in his stead.

Paul O’Connell informed us today that the Munster forwards had to re-jig their lineout calls en route to the stadium and still O’Mahony was put up for the coin toss with Jamie Heaslip.

A valid excuse for that could be that the new captain, Damien Varley, as the hooker, was a fairly busy.

Varley, who has missed most of the season with a foot injury sustained against Ulster, was unable to finish the game and although he missed training today is expected to be fit. Same goes for Keith Earls.

“Another managed work load,” Penney continued. “Coming off not a lot of rugby, (Keith) played 80 minutes at the weekend. Had high miles, high contact and had a great game.”

Penney was still sore about the refereeing of Alain Rolland on Saturday night, to such an extent that when Munster’s scrum dominance was suggested as a positive to take from defeat he quipped: “Do you want to let Alain Rolland know that!”

The outgoing Munster coach expands on this, in some detail, and his view on northern hemisphere refereeing in Wednesday’s Irish Times.

Toulouse have their own problems with former All Black outhalf Luke McAlister a major doubt along with Louis Picamoles (pelvis) and flanker Yannick Nyanga (ankle) but Census Johnston got the all clear after a scan despite being stretchered off during the weekend defeat to Toulon.

It’s also being reported in France that their New Zealand winger Hosea Gear is, like Penney, leaving for Japan this summer.