French side far from their best as they see off Wasps 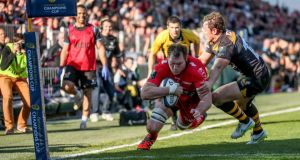 Error-strewn Toulon failed to convince but still stepped up their quest for a record-breaking third consecutive European title by edging past Wasps 32-18 at Stade Félix Mayol.

Wasps’ Tonga wing Will Helu pinched a second-half brace to give Toulon pause for thought, but the reigning European kings had enough nous to ensure victory.

Toulon were sloppy in the extreme for the majority of the game, with Frederic Michalak at his unpredictable best with ball in hand, although for once the former France outhalf was also faultless from the tee.

The 32-year-old’s flawless kicking return of 22 points effectively separated the sides and inched Toulon into the final four.

Mathieu Bastareaud struck early for the hosts, but Wasps refused to be cowed, and somehow found a foothold.

Dai Young’s men can be proud of their European adventure, in their first top-tier knockout stage run since their 2007 Heineken Cup title.

The hosts struggled to appease their taskmaster owner, and that aim could perhaps account for a level of their sloppiness.

The fervent home support achieved its intimidation target immediately, Guy Thompson knocking on the first high ball of the match.

Michalak added the extras for an ominous opening, but somehow Wasps summoned a scrum platform.

The visitors exploited an early set-piece edge to allow Alex Lozowski to cut the deficit to four points from a penalty.

Toulon’s enviable power allowed the hosts to grind their way through Wasps’ line almost at will, Ali Williams and Bakkies Botha both making telling clean breaks.

Wasps countered with a smart backline scythe of their own, Elliot Daly stepping through traffic to send Rob Miller tearing away.

The former Sale fullback’s attempted pass to Tom Varndell was batted away by Delon Armitage however, with the ex-London Irish man perhaps fortunate to escape punishment.

Toulon were quickly buccaneering again though, this time hooker Guilhem Guirado scampering away in midfield.

Wasps scragged the high-stepping frontrower deep in their own 22, only for Miller to receive a yellow card for killing the ball at the tackle.

Michalak posted two penalties to one from Lozowski as Wasps got to grips with Miller’s sin-binning – and then Toulon started wasting chances by forcing the issue.

So desperate were the hosts to atone for that rare blip at Toulouse that every chance to move the ball wide was seized with troubling alacrity.

Michalak almost confused himself with a blindside switch that Varndell just about snuffed out, then Carl Hayman could not hold on after a bout of juggling.

Miller returned to restore Wasps’ full complement, but parity in numbers did little to stymie the Toulon onslaught.

Michalak added his fourth and fifth penalties of a flawless kicking half as Toulon turned around 22-6 to the good.

Toulon botched another try-scoring chance at the top of the second half and then gifted Wasps a route back into the contest.

So what ought to have been a regulation victory instead became a real scrap.

Toulon finally posted some second-half points when Michalak landed his sixth penalty with 12 minutes to play, a goal that eased fraying minds and tempers on the Cote d’Azur.

Just when Toulon expected to slide home undeterred though, up popped Helu again, tiptoeing to his and Wasps’ second try.

Goode had the chance to cut the deficit to five points with six minutes to play, but dragged the tricky effort wide.

Wasps could still have pilfered a draw through a converted try until Williams trotted into the right corner.

Michalak added the conversion for good measure, finally killing off the contest with two minutes on the clock.