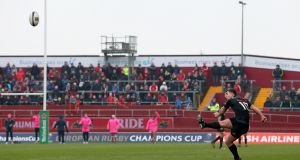 Arnold Schwarzenegger claims that “legends are not born”. The Austrian should know; as a professional bodybuilder and winner of Mr Universe at 20 along with seven Mr Olympia titles with a career as a model, actor, businessman and two time Governor of California he fully understands that "legends are built".  I agree and hence my frustration with major aspects of the professional game here.

Paul O’Connell, the legend, is gone but it’s interesting how I mentioned Kerry man Ultan Dillane last week when comparing him with Munster’s import Mark Chisholm. Dillane resides in Connacht and the Irish squad; a legend in the making? Why not in a red jersey?

Last Saturday I was delighted to witness a smile on the faces of Munster players and supporters alike. Mike Sherry was immense. Dave Foley hunted Sergio Parisse like a man possessed and Simon Zebo’s try was one of precision, with perfect execution from Ian Keatley. But I can’t help joining all my thoughts together.

The crowd in Thomond Park was about 18,500 which, considering the capacity of 26,000, is a fair turnout in tough times. However, the unsold 7,500 seats represents something. Guessing an average figure of €40 per seat, that makes a lost income of €300,000. How many of the marquee games in Thomond have similar figures? How many millions of euros have slipped through the net? And how many thousands have been invested in players such as Chisholm? Is he better than Dillane?

This Wednesday I peeled back the years in attending the double header: Castletroy College and Glenstal Abbey School playing out junior and senior cup ties in Garryowen FC. The junior cup game was stilted stuff with sparks, such as the Glenstal openside Michael Gilbride hunting down substitute winger Robert Holmes; a tackle and turnover that provided the opportunity for Glenstal to score moments later.

On the Castletroy side Eoin Murphy owned the midfield with beautiful balance and feet. Up front Castletroy’s Ronan Keaveney exploded into life with powerful runs that epitomised much of domestic rugby; precious little came from them. But the pitch was set alight by the Glenstal fullback, Ronan Quinn, who was electric.

I suppose that’s what I’m exploring; ignorance of space. Why does it take a minor miracle for fullbacks of Quinn’s electric under-16 talent to arrive on the ball? Why is space ignored for contact? Why is there no turnover policy?

I’ve been very consistent in these pages over the years so my recent exploration of all things Munster is no new fad. I’ve long bemoaned that 20 years into professional rugby there remain two top schools playing in Cork; from a population of 400,000.

I’ve enquired of Alex Ferguson’s reaction to being told by his CEO when taking over Manchester United “half your squad live and train in Liverpool with the remainder in Manchester”. “What?”

That was way back in 1986, nine years before professional rugby hit these shores. How long do you think Ferguson would have tolerated this?

Regardless of the flow out of Munster, there is an acceptance of a poor flow into Munster’s professional game (academy etc). There are far fewer directors of rugby in the hotbeds of the Munster game compared to Leinster.

I also believe that there’s a disjoint between the needs of the professional game and the domestic game (ie schools and clubs).

Now back to the millions of euros being lost through empty seats. Would this solve these problems? Has the professional game in Munster created a business plan around the problems they face? Have they costed this plan? In other words, how much would it cost to equip the schools or clubs with quality directors of rugby?

How far would the multiples of €300,000 go in developing quality coaching at underage level?

When terror struck the Twin Towers on 9/11, George W Bush convinced his American people to keep spending; keep the economy going. He convinced them that he’d look after the rest.

Munster need those €300,000 worth of empty seats filled more than ever as they rebuild. Are the Munster supporters being convinced they need to keep spending; are they feeling loved?

Not the ones I meet every day. They know their team is struggling but they’re not happy with Munster Inc.

Much debate ensued from the booing of Keatley some weeks back. I was amazed at the criticism. Not because I agree with this behaviour but because that section of the paying public were communicating something to the Munster organisation; not the player. Was Munster Inc listening?

The unhappy supporter’s alternative is to cancel their season ticket or match-day ticket. Their team is losing so they need more love from the organisation, not less.

Finally, to last Wednesday’s senior cup. The physique of the combatants was incredible. In the Castletroy pack stood the ferocious- looking secondrow Evan Slattery, ably supported by his blindside Dylan Reeves-Wasik.

They were a well-drilled pack but Glenstal were far better footballers and at outhalf there was a Ronan O’Gara-esque performance of supreme tactical kicking by Ben Healy. Who won the games? Who cares, because I wonder how many of these fine athletes actually understood what they are doing, in preparation for the sub academy and beyond?

Munster Inc, get bums on seats and start investing for the future Munster legends that can be built.