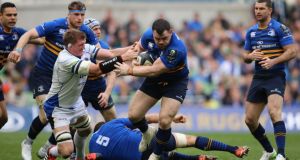 Bath’s Stuart Hooper tries to get to grips with Cian Healy during the Champions Cup quarter-final at the Aviva Stadium. Photograph: Niall Carson/PA Wire

You could almost reach out and bite the tension during a taut, fraught endgame and so the natives will remain a little restless after Leinster huffed and puffed their way to their first semi-final in three years. But at least they showed their big-game mettle. Sixteen teams and more around Europe would swap places with them.

In something of a dog-eared script, once again Leinster couldn’t buy a try and were indebted to Ian Madigan’s accuracy off the tee, his second six-from-six return in consecutive weekends earning passage through to the semi-finals – if not exactly safely but eventually.

Indeed, as in the 21-16 win away to Castres, when kicking seven penalties from nine attempts, and in the bonus point 24-18 defeat away to Harlequins, when landing six penalties from six, for the third time in seven European Cup matches this season Madigan scored all of Leinster’s points. Given half of Saturday’s 18 points emanated from Leinster’s superior scrum, Bath losing two English test tightheads in Dave Wilson and Henry Thomas was fairly critical.

Matt O’Connor pointed out that Leinster “are 80 minutes away from a final” and when it was suggested that another fortnight’s preparation would see more of a performance, the Leinster coach said: “I wouldn’t be too worried about the performance, it was about the result. It doesn’t make a difference how much you win by in knockout rugby, you’ve got to make sure you’re in front after 80 minutes.”

This was Leinster’s 16th win in 19 knockout ties over the last five seasons, yet as feared and expected from a team for whom this was something of a free hit, Bath played with more freedom than an increasingly anxious home side. That said, Bath overplayed their hand at times, and committed 18 turnovers to Leinster’s eight.

Leinster bossed long stretches, having almost 60 per cent possession and territory, and won the penalty count 12-4. But Bath made seven line breaks to two, 14 offloads to four, and Leinster missed 26 tackles to Bath’s 13. Alarmingly, this followed the 30 missed tackles a week previously against Glasgow. That’s 56 missed tackles in successive home games, give or take a few. From the vantage point of the cheap seats in the Upper West Stand, Leinster’s defence had more dog legs than a kennel.

At times even missing pillars after a phase or two, there were system errors as well as all of those missed first-up tackles. By dint of desperate scrambling, they somehow limited the damage to two tries but as O’Connor and the players freely admitted, they can ill-afford a reprise of such carelessness in the semi-finals.

Leinster had ambition, often having a good shape to their attack and using the full width of the pitch – with Madigan putting plenty of pace on the ball and Luke Fitzgerald’s footwork on a par with the Bath marauders. But they didn’t employ the same decoy runners off the ball, and generally Bath’s defence could drift without alarm.

In broken play the visitors were altogether more alert and dangerous, especially with Anthony Watson’s wondrous footwork and pace given free licence to have a go from anywhere on the pitch.

Although a fired-up Leinster dominated the first quarter, the first warning shot came in the ninth minute. Retrieving a grubber from Jimmy Gopperth behind him to his right about 10 metres from the touchline, Watson’s first instinct was to switch back infield so as to increase his options. The hard-running Matt Banahan was alive to the possibilities, taking a sharp left-to-right line as Watson danced infield to take the offload, bust two tackles and almost break clear before his daring offload went to ground and was snaffled by a surprised Mike Ross.

Hence, the team dealing in three-pointers were always a decisive blow away from putting away the team more capable of scoring in fives and sevens. Sure enough, George Ford twice surgically dissected the blue line, first dummying through a gap between Devin Toner and Jordi Murphy to score himself, then accelerating between Cian Healy and Toner to give a try-scoring offload to Stuart Hooper.

Leinster eventually won the first half thanks largely to their scrum and work on the gain line, where Healy, Sean Cronin, Murphy, Jamie Heaslip and co carried hard into contact, and also drew plenty of psychic energy from how the half ended, when Fergus McFadden read Ford’s pass behind a screen of three players to come off his wing and clatter into Watson.

Alas, hardly a game goes by now without a high hit and ensuing concussion, and upon the restart McFadden was laid out after a collision with Kyle Eastmond. McFadden dipped slightly before contact, and there was an element of misfortune, but it was still a high shoulder by Eastmond – albeit it now seems to be almost commonplace nowadays. For safety reasons, the IRB have to bring the tackle down, which in turn would afford more offloads.

After Ford inched Bath to within three points, Leinster were indebted to the sharpness of Gopperth when Alafoti Fa’osiliva charged down an Eoin Reddan kick.

Had Ford managed to level matters – and he was eyeing up a drop goal in the last phase of play before Jérôme Garcès decreed that Matt Garvey came in from the side as Richardt Strauss contested – it would have led to 20 minutes’ extra time. The advantage would then have been with Bath, for if they had finished level again, the team who had scored the most tries would have advanced to the semi-finals.

Hooper’s try at least roused the crowd – which supposedly numbered almost 44,000, but looked considerably less than that and was, at times, in relatively subdued Saturday afternoon mood. But they were at their most voluble in chanting Leinster home. Home advantage and knockout experience told in the end. Just about.