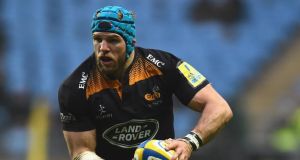 ‘I coulda’ been a contender,” laments Terry Malloy to his brother Charley ‘The Gent’. “Instead of a bum, which is what I am – let’s face it”. Marlon Brando’s On the Waterfront character Terry struggles with the mob violence and racketeering on New York’s waterfront.

His brother Charley, failing to convince Terry to turn a blind eye, loses patience when saying: “Sure, that’s alright when you’re a kid, but you’ll be pushing 30 pretty soon, slugger. It’s time you got some ambition.” To which Terry retorts with my favourite line in cinema: “I always figured I’d live longer without it.”

Wasps are a reasonable side but Harlequins forced Wasps to outtackle them, 199 to 78. It doesn’t end there as Harlequins made 188 runs to 87 and smashed them passing 295 to Wasps 91.

Similar to Vunipola, Haskell’s post tackle technique is excellent. Yes, he makes the tackle but what makes him so dangerous are the ensuing seconds after the tackle. He has the power and physique to stand up and steal or counter-ruck and engulf the subsequent ball carrier. Alongside Haskell is Bradley Davies, the poor man’s version of Brad Thorn.

He’s a tough nut and loves the physical interchange.

Unbridled ambition is one thing that could prove Leinster’s undoing, but pace is their friend. With the exception of electric scrumhalf Joe Simpson, Wasps trundle along the pitch right to left and then swing backwards with slow one out passes to their backrow (none of whom equate to Vunipola).

Every now and then Wasps will send a wall of fatties up to the gainline with Goode waiting behind to add depth to their attack and create a dogleg in Leinster’s defence; such stuff was easy for the Gordon D’Arcy/Brian O’Driscoll defence but alas that’s been broken up.

So Wasps will most likely look to suck Leinster’s midfield out of shape with a pedestrian offload back in against the grain. It shouldn’t catch Leinster out.

Wasps’ opening three tries against Castres at home and their two against Harlequins were unforgivable from a defensive point of view.

So Leinster’s controlled pace will cause all sorts of problems where players such as Wasps’ Springbok blindside Ashley Johnson will struggle to impact offensively or defensively with an accurate pacey performance from Leinster. As the game slows down it will afford Goode and Johnson easy entry points which would be a pity especially for Johnson as he is so often carried by his team-mates.

The paradox in pace is that Wasps’wingers have outrageous speed to pounce on the counter or errors.

Their lineout has limited movement, typically interchanging one up or down the line and will undoubtedly avoid Devin Toner. Varying Toner’s defensive location pending Wasps’ field position and score will add pressure.

On the flip side, Wasps tend not to get in the air defensively off opposition short lineouts. But Davies’s second row partner, Kearnan Myall, is super across the ground and easy to get into the air – best avoided.

Wasps don’t have a great maul and struggle to contain the opposition’s where a three -quarter target from five metres would maximise Wasps’ poor defensive maul by isolating lazy lineout defenders towards the touchline. Although in the four jersey, Davies, as the more powerful scrummager, packs down behind the tight head prop. Allied to that both Wasps’ tightheads are tall; both 6ft 3in and open to a concerted low-level attack.

In fact their tightheads, especially Jake Cooper-Woolley carry very high in contact, leading with the ball and are prone to being chopped down or choke tackled.

Leinster have had their teething problems in terms of injury, form and precision but Wasps are no Saracens and remind me of a very competent cup club team with a siege gun at outhalf and should the ball accidentally find its way to wingers Tom Varndell or especially Christian Wade they have the speed to score from any distance.

Even though it’s away from home and both sides have all to play for, Leinster have the pedigree but must control the pace to punish Wasp by stopping Simpson and Goode. PS. As we all battle daily for the inches available to us I often wonder was Terry right? Would I live longer without ambition?

1 Keeping Donegal on the road to success a costly business
2 Six Nations: Ireland v England all you need to know guide
3 TV View: Roy Keane but Daragh’s keener as Late Late fails to shoot the lights out
4 Ireland Slam England at the Gardens to open up Grand ambitions
5 Matt Williams: Ireland will need to step up on Wales display to prevail at Twickers
Real news has value SUBSCRIBE